Some time ago I mentioned a detergent test I made, and now you can see what the result was. I had this embroidered cushion cover from the beginning of last century, loved and used to shreds really, and still kept safe. I photocopied the embroidery to keep the lovely pattern safe. As you can see on the right side of this picture, the fabric was stained and yellow. I thought it can't get worse if I give it a try with some Vanish Oxy. Two hours soaking, a careful wash by hand, a thorough rinse and a flat dry, and you can see the difference. 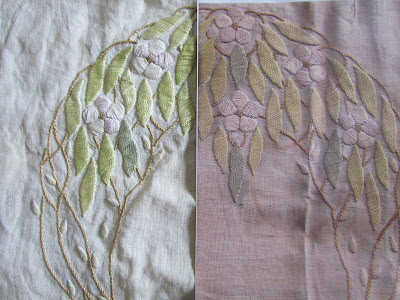 Here it is after a light ironing. I can't imagine a better future to any of my handicrafts. Instead of being folded away from light and sight, they would be used, worn and washed. This cushion cover has been used for a long time after the first holes appeared, until it practically fell apart and could not cover a cushion any longer. I can imagine some female ancestor insisting on keeping it, maybe her own work or a gift from someone special. Maybe her husband used the cushion when taking a nap, the linen feels so cool and lovely. This piece is definitely beyond repair and must have been kept for sentimental reasons. 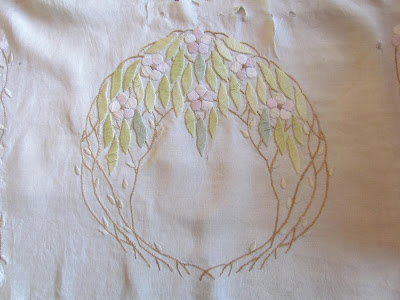 The colours have faded over the years 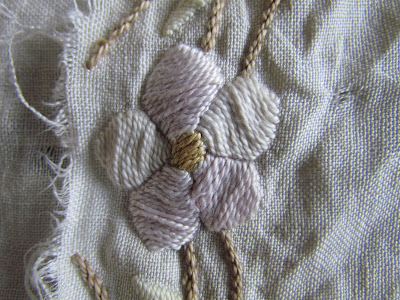 but on the reverse you can see how lovely it must have been when it was new. 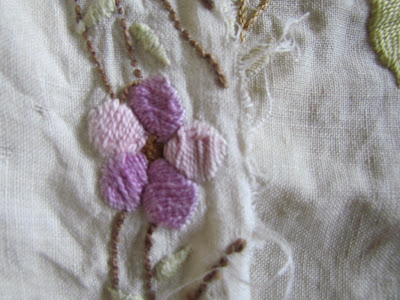 I'm trying to find a spot with the fabric intact, large enough to use in the Splendid Sampler quilt instead of the embroidery suggested. I'm honoring the original creator by doing so, and I hope to copy the pattern some day for a new cushion cover.

Here are the new blocks I have finished since my last update. Mr Bunny, almost like Peter Rabbit. Not trimmed to size yet, I notice. 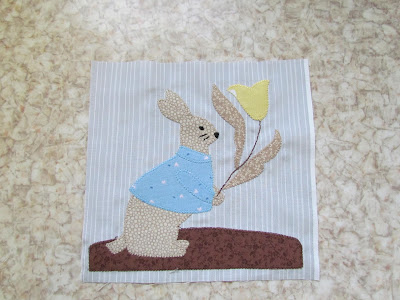 This one was fun and easier than it looks. 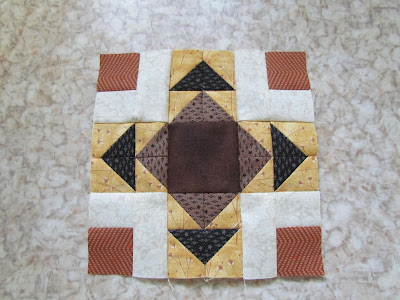 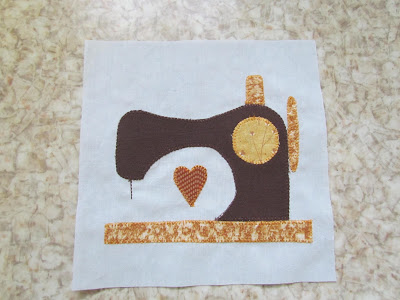 and paper piecing, with the tiniest pieces I have ever tried. 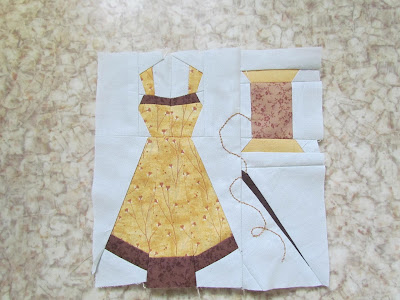 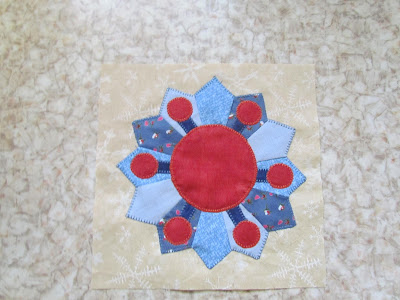 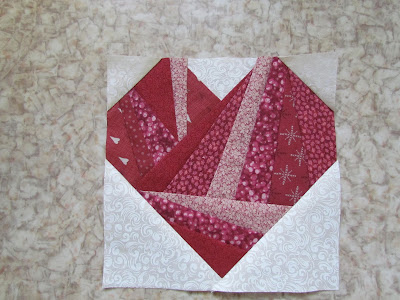 And yesterday's block, fast and easy piecing for a change. 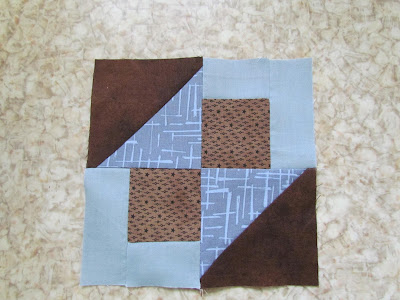 A group photo of all my blocks, missing block 20 but including two bonus blocks. 69 more blocks to sew! 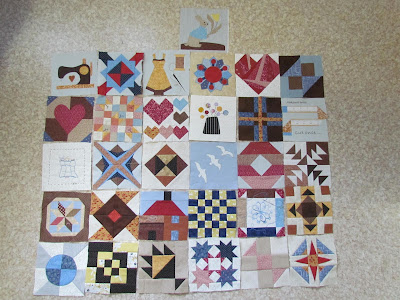 We have finally had some warm days again and the flowers in the garden are doing well. 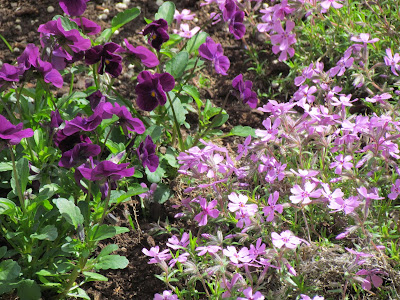 The apple trees were in bloom a week or two earlier than usual, but luckily the weather remained warm and the bees were busy. The tree in the back was already full of blossoms when the on in the front was just beginning. This is my apple sauce tree, the bigger one is just for eating apples. 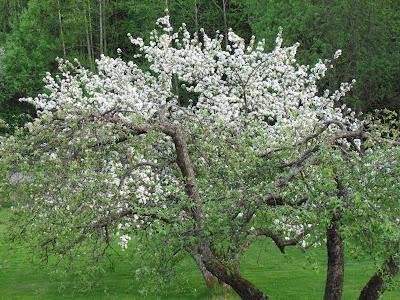 In March I thought I could post about my collected/accumulated treasures every Saturday like my daughter Kaija does under the title Accumulator Seriali on her blog Paperiaarre. Well, as my treasures are not real collections but spread all around the house, I didn't come to making the necessary photos (and the weather was cloudy etc.). Now that I found out she is making today's post about jigsaw puzzles, I decided to show mine on the very same day. I'm using old photos I took in 2013 (and 2008) when I had a period of puzzle making, so some of these may have already changed owner and appear on my daughter's blog too. In my childhood the puzzles were a lovely, quiet way to spend rainy Summer afternoons indoors.

These puzzles all come from my mother's family, from the first decades of the 20th century. They originally came in hand made folded boxes made of strong paper, but when those fell apart, small chocolate boxes were used to keep the pieces safe. 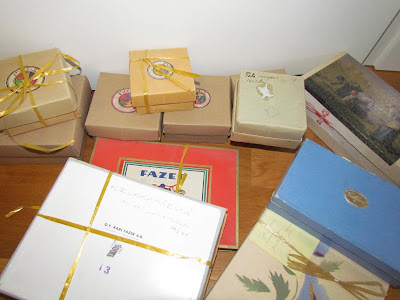 I made a lot of new boxes after the original pattern and copied the hand painted logo to be glued on the lid. 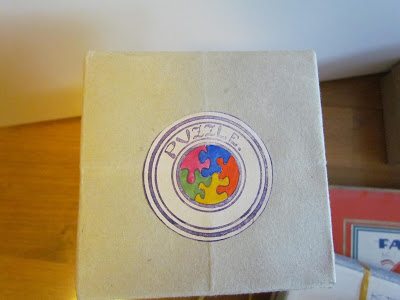 I bet you want to see a hand-made jigsaw puzzle from almost one hundred years ago. Here is a typical one, a landscape picture from a magazine, glued on thick cardboard. 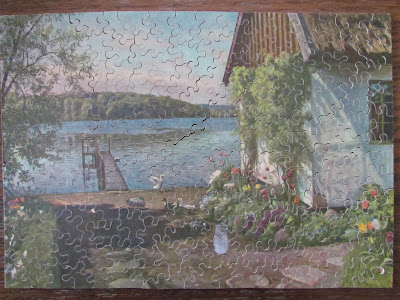 A more exotic looking one, with a tip of one piece fallen off. We used to write on the box bottom if pieces were missing, or tips. 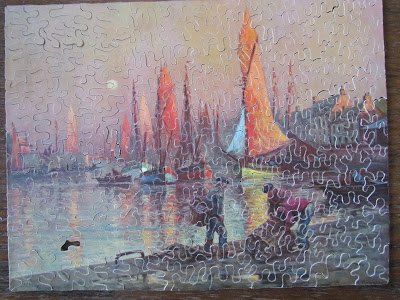 Favourite themes were art reproductions, like The Gleaners by Millet (I had two of these and gave Kaija the other one) 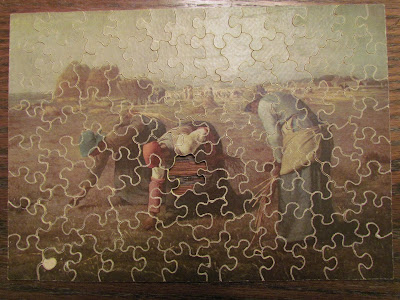 or  this Shepherd Boy from Paanajärvi by the Finnish painter Akseli Gallén-Kallela. 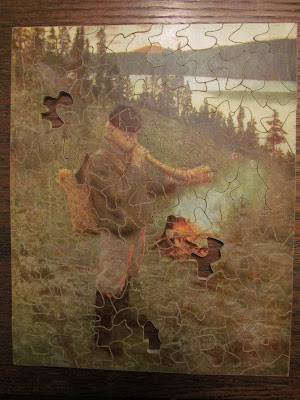 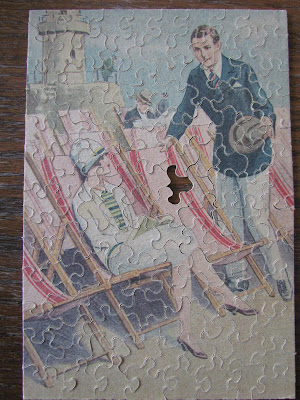 or this one, The Diva, 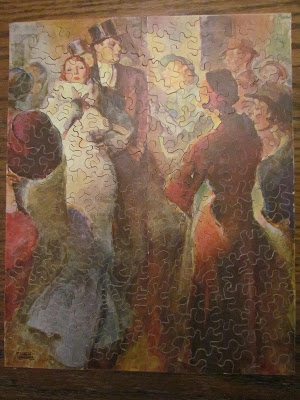 and some other are more on the domestic side. 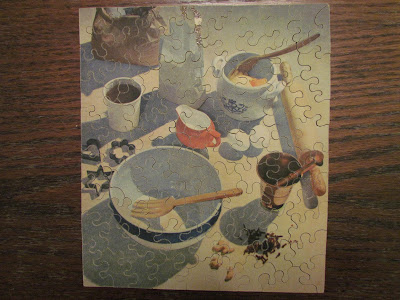 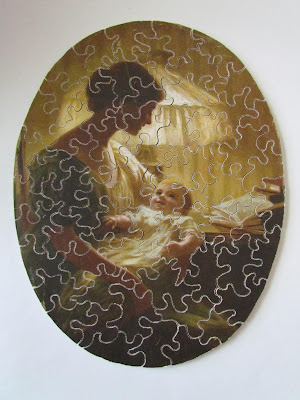 and unusual shapes of the individual pieces, like in this one: 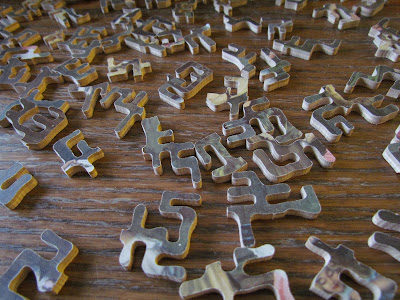 They were almost impossible to hold in place until a larger area was finished, but the result was this charming picture: 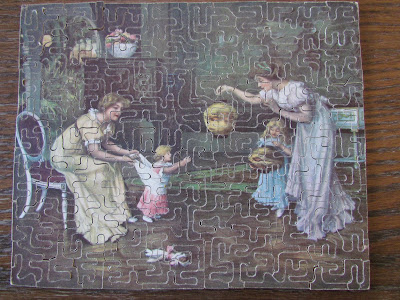 Very few of the pictures are from Finland (the Shepherd boy painting and the gingerbread baking), but at least this one showing people on their way to Christmas church has all the elements of an old fashioned Christmas card. 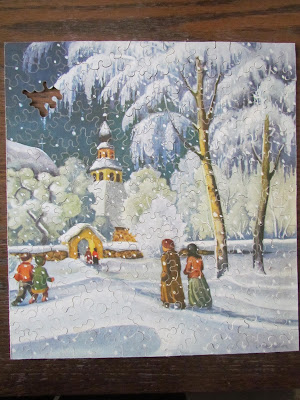 My mother was not a little child by the time she started building these jigsaw puzzles so there are no children's puzzles here. Four Little Pals would have pleased a child as well, but putting it together is no child's play. My mother used to lift a finished puzzle like this one from one corner, and it would hold together. But it had to be finished, and no pieces missing. 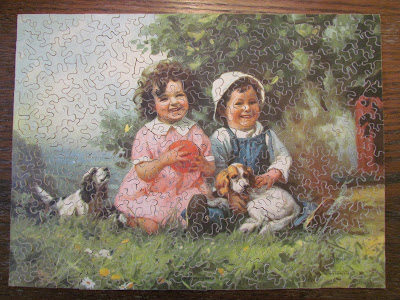 This is the only picture that looks like an illustration from a children's book,and even the sawing is easier than in the other puzzles, where the maker has intentionally chosen tricky lines along a shape in the picture. 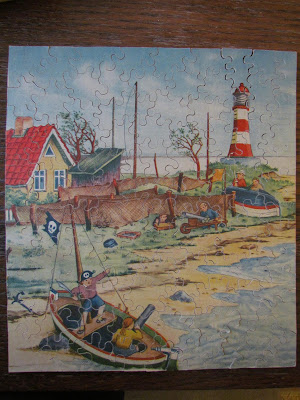 I leave you with this dark picture of a young girl. The saw lines remind me of free motion quilting. 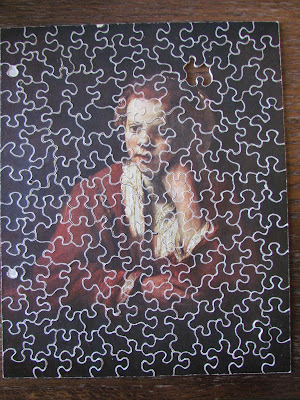