Finally the Shadow Plaid quilt top is finished, with all four borders and extra rows in the centre. 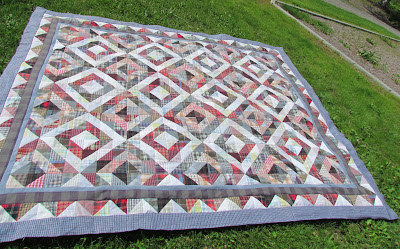 I'm quite pleased how I managed to get the corners right, only one corner needed some adjusting to make the bias squares meet. The next big step will be the layering of this large quilt and quilting it on my machine. I don't know about the Queen and King sizes, but this will cover two beds nicely. It feels good to have the quilt at this stage after maturing the plan for so many years. It wasn't even an UFO really, just some squares cut and some unlucky bias seams sewn. 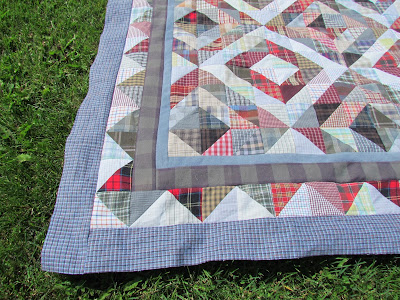 The Tour de France is over for this year and I can have some free time again ;o). It just happened that I knitted one extra baby hat. This baby boy yarn only needed 64 stitches and about 70 rows so I often started a second hat and didn't keep count on the finished hats every day. The finer yarns I used for the lace patterns needed about 90 stitches. 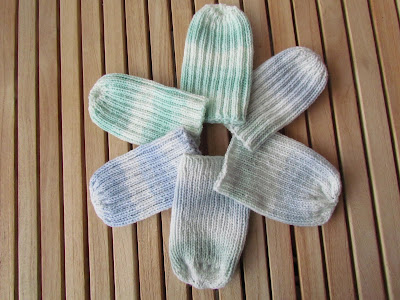 All Tour hats in a group photo. Now I only need to knit 20 hats in August during the Vuelta which is not so interesting to watch as many of the stages are on big open roads. 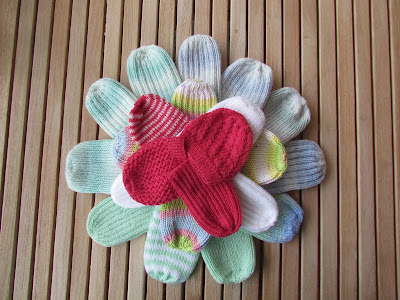 The cyclists are reaching the Alps and enjoying their well earned rest today. Many have been hurt in crashes during the first stages, many continue the race with bleeding limbs patched on the road and later properly. Last night I experienced some dangerous moments with hard cheese and a cheese slicer: 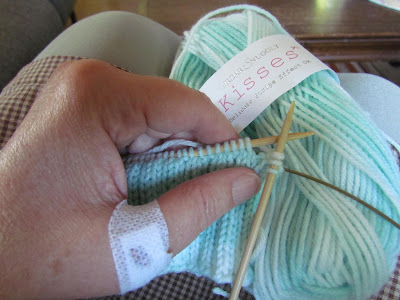 My grip slipped, and I sliced away the scar on my thumb from a previous cheese slicer accident some years ago. There was a lot of bleeding, but luckily I just missed a proper vein. This picture is from this morning, with a new dressing on the wound. I'm just showing you how far I was with the next baby hat before I had to stop for the night.

Here are the week's hats, the last bits of the light green and the white I used during the Giro, and a collection of the tiniest rests in the green, blue and multi colour hat. On the right is the first hat with the Sirdar Kisses baby acrylic, the second one is on the needles. I found a bag with six balls of this yarn, in green and blue shades. This will look a bit boring but keep me busy for the rest of the Tour and beginning of the Vuelta d'Espagne. 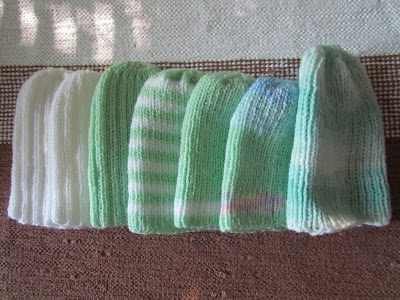 In celebration of the 50th year since I hurt my knee I'm on the waiting list for a knee replacement. My old stick from the school days didn't look too great, so I decided to do some yarn bombing. I didn't want to look like an old granny with a walking stick, so I crocheted some bright granny squares to cheer up my stick and maybe to get a smile or two when I limp around. 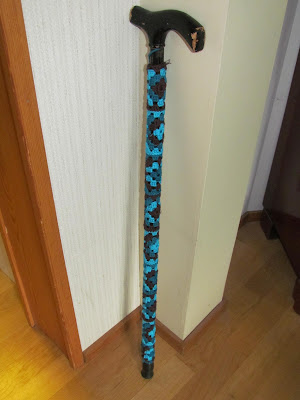 Close-up of my grannies:

I was wondering if the doctors would give me a smart looking knee after all the years I have been walking around with chubby knees and a huge scar in one, but I can forget about mini skirts for the rest of my life: they will only replace the damaged surfaces of my old bones and add another scar to the knee. Now it is just waiting for Winter and my turn on their long list. 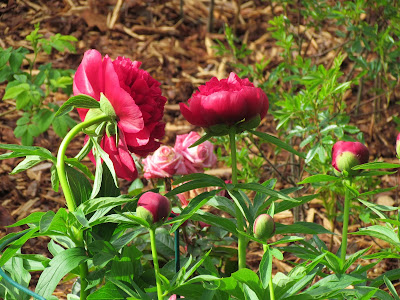 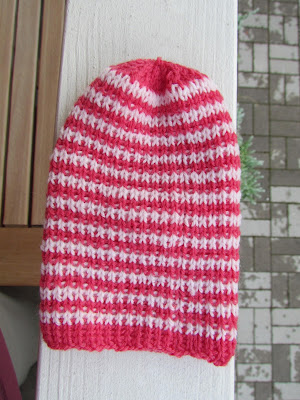 Then I moved to a rainbow ball of yarn - the cycling world champion always wears a "Rainbow jersey", a white shirt with five coloured stripes. 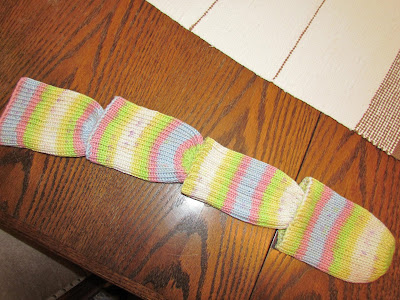 Finally a group photo of the first baby hats of the first nine days of the Tour de France watching. Today the cyclists are resting, and tomorrow I'll be visiting DD Kaija in Jyväskylä. 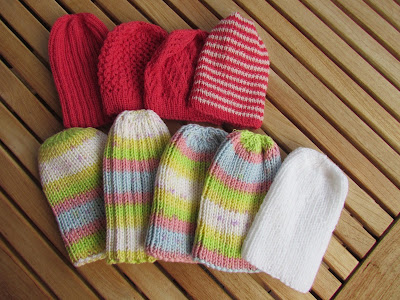 The Shadow Plaid quilt centre is finished, and after taking this photo I have added the two first borders. I just need to cut more squares to make the pieced border, so it may take some time... 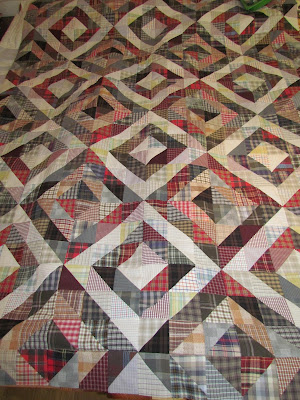 Last Saturday was a big day: the first day of this year's Tour de France, 3,360 KM of cycling during 21 days, with just two days of rest, and the 100th anniversary of my father. I have a tradition of making some crafty project during the long hours spent in front of the TV. It has been baby hats in 2012, and some baby blankets too, it has been Scandinavian Christmas quilt stitching in 2012 and 2013, last year probably sock knitting, and this year it will be baby hats again, like  during the Giro d'Italia earlier this Summer.

My last Giro hat, the red one in this group photo, ended up too large 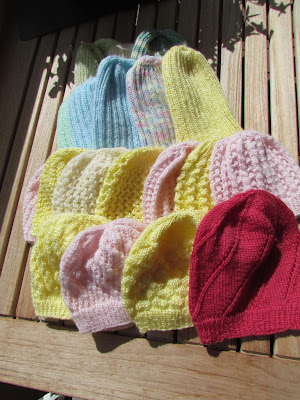 so I un-knitted it and knitted the yarn again, with less stitches and using this cable pattern: 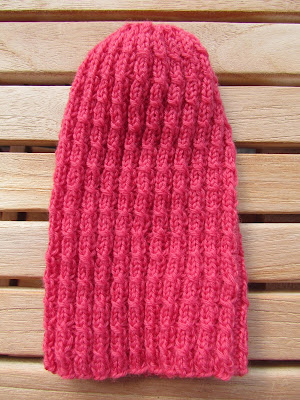 I also prepared for more busy days and knitted some hats during other spare moments, so here is a hat for day one 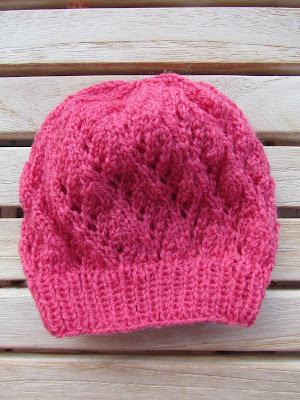 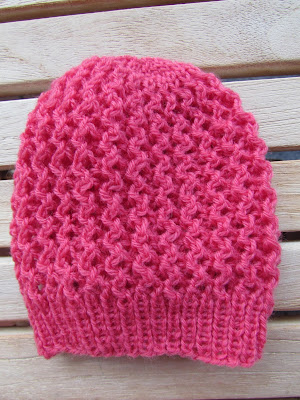 and day three, which was yesterday. 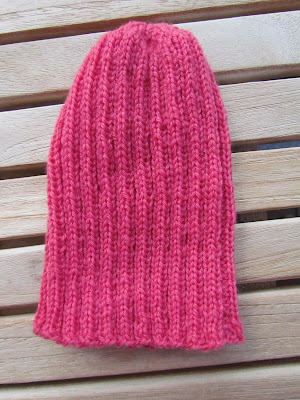 With the cable hat of the Giro group, they kind of spell my name: 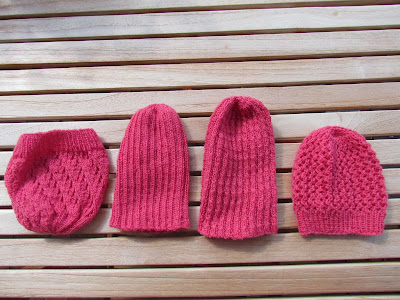 Today's hat with the last bit of this red and the last bit of the Giro pink is on the needles and will be shown in my next post. Yesterday's big crash needed my attention more than the knitting. I hope today will be a better day for the cyclists and for my project.

Meanwhile I have been busy making more coasters for the Villa Cooper: 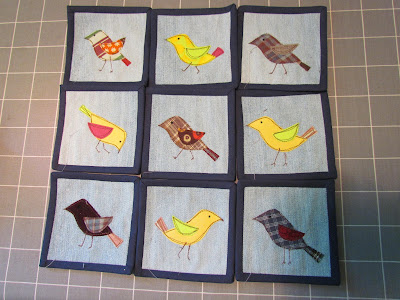 My Shadow Plaid quilt is coming together nicely, but I keep cutting more and more squares to make bias squares. Unlike Stephanie, who has her Supreme pattern testers (including yours truly), this author has obviously not had her pattern tested. The pattern tells me to cut 216 dark squares, 144 light ones and 72 medium ones to yield 432 bias squares, which sounds like an awful lot. But after I have made 12 blocks consisting of 4 nine-patches each, I have used 12 x 4 x 9  = 432 bias squares. The next step is to take the leftover bias squares (which I naturally did not have) and make two strips of 24 squares for the sides, and later I would need 96 bias squares more for a border, and 4 for the corners. 148 bias squares are missing from her list! I think that too is a lot. I don't know if her yardage estimates are accurate, because I have naturally used odd pieces of old shirts, and luckily I have lots and lots more of them. The book is called Mad about Plaid! and it is by Debbie Bacon. 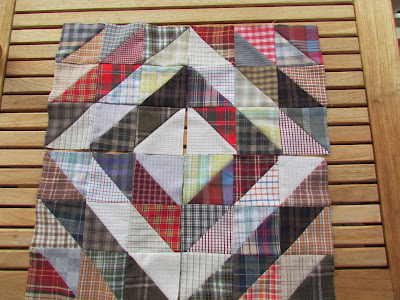 The peonies are in bloom again, and so heavy with rain. 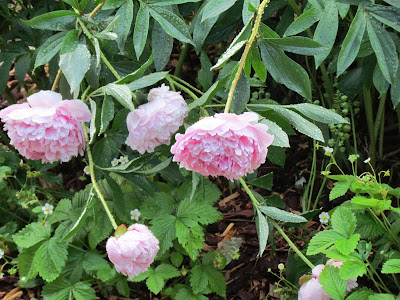