Knitting and Tatting - well, I haven't done anything else lately

That's how it is when you are learning a new skill. Keep starting new little projects, some are finished and some end in the bin because your knots were too tight to be undone. This heart is almost fine, I still have to learn how to hide the last ends of my thread. 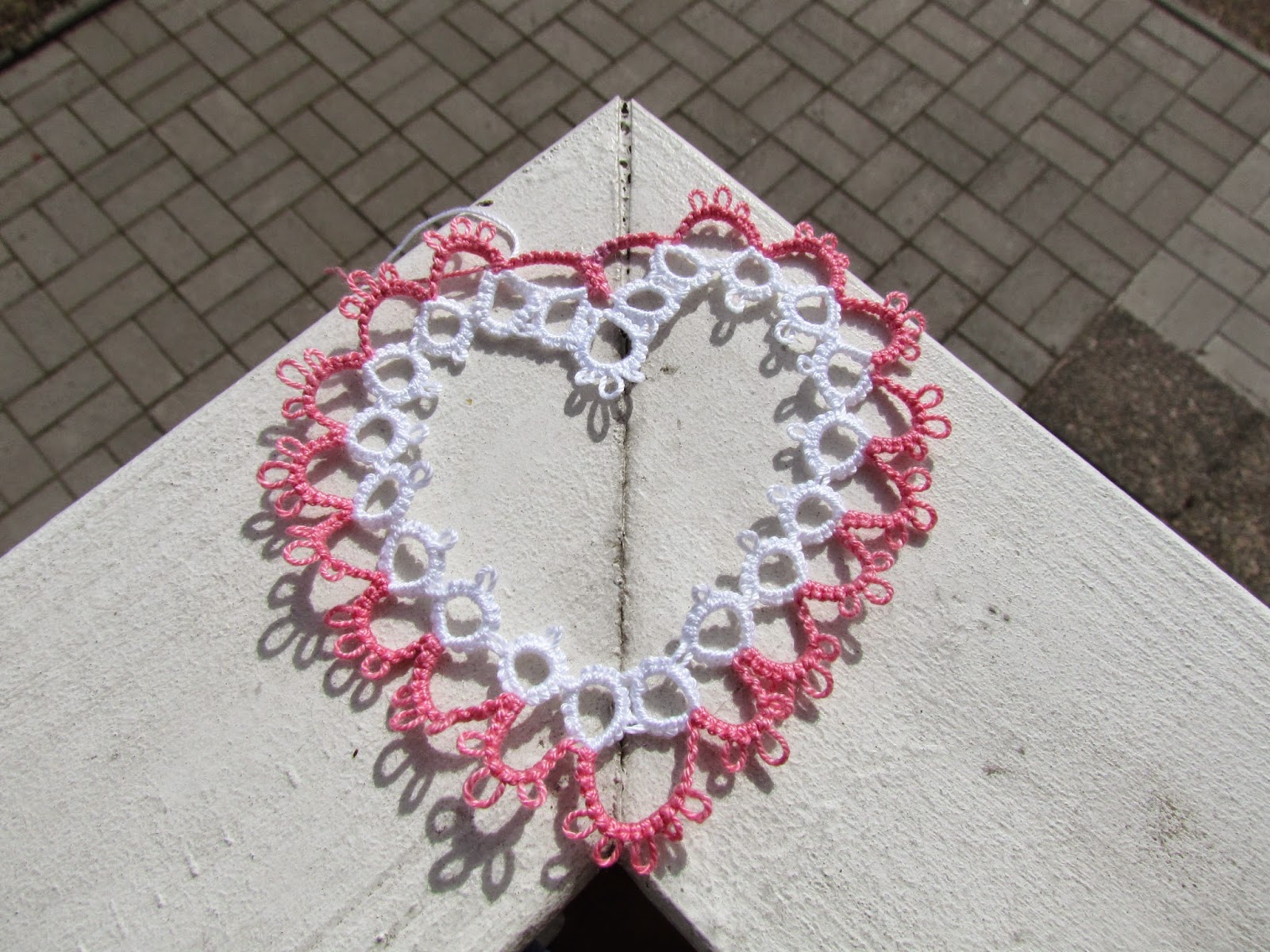 While in Germany, I finished the light green bed socks. Our trip was to the same event and same places as in earlier years so I will not bore you with the same photos again. The trip was fine, the fair was excellent and the weather could have been a lot warmer. 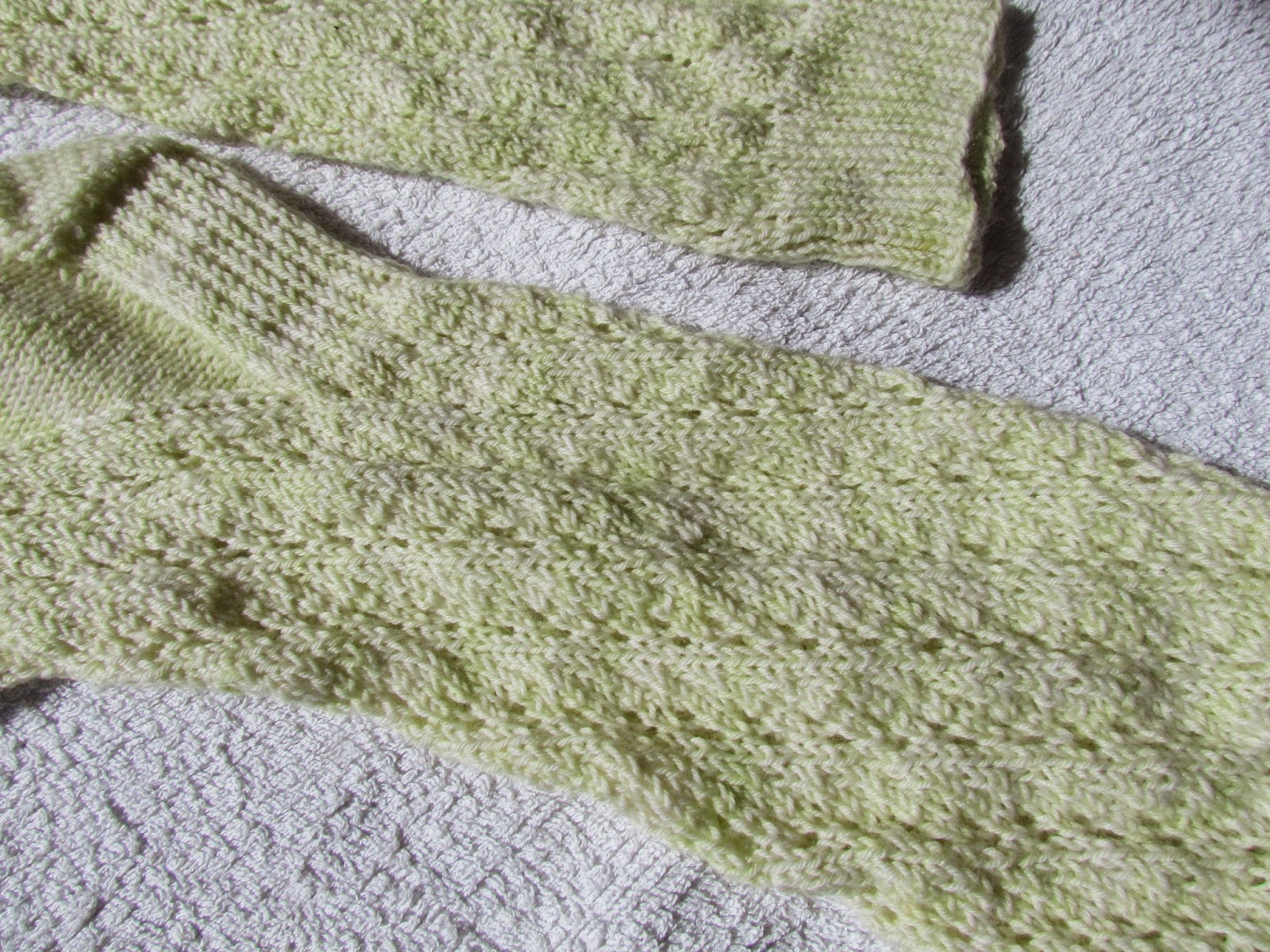 They are very comfortable, and I like the longer legs for a change. 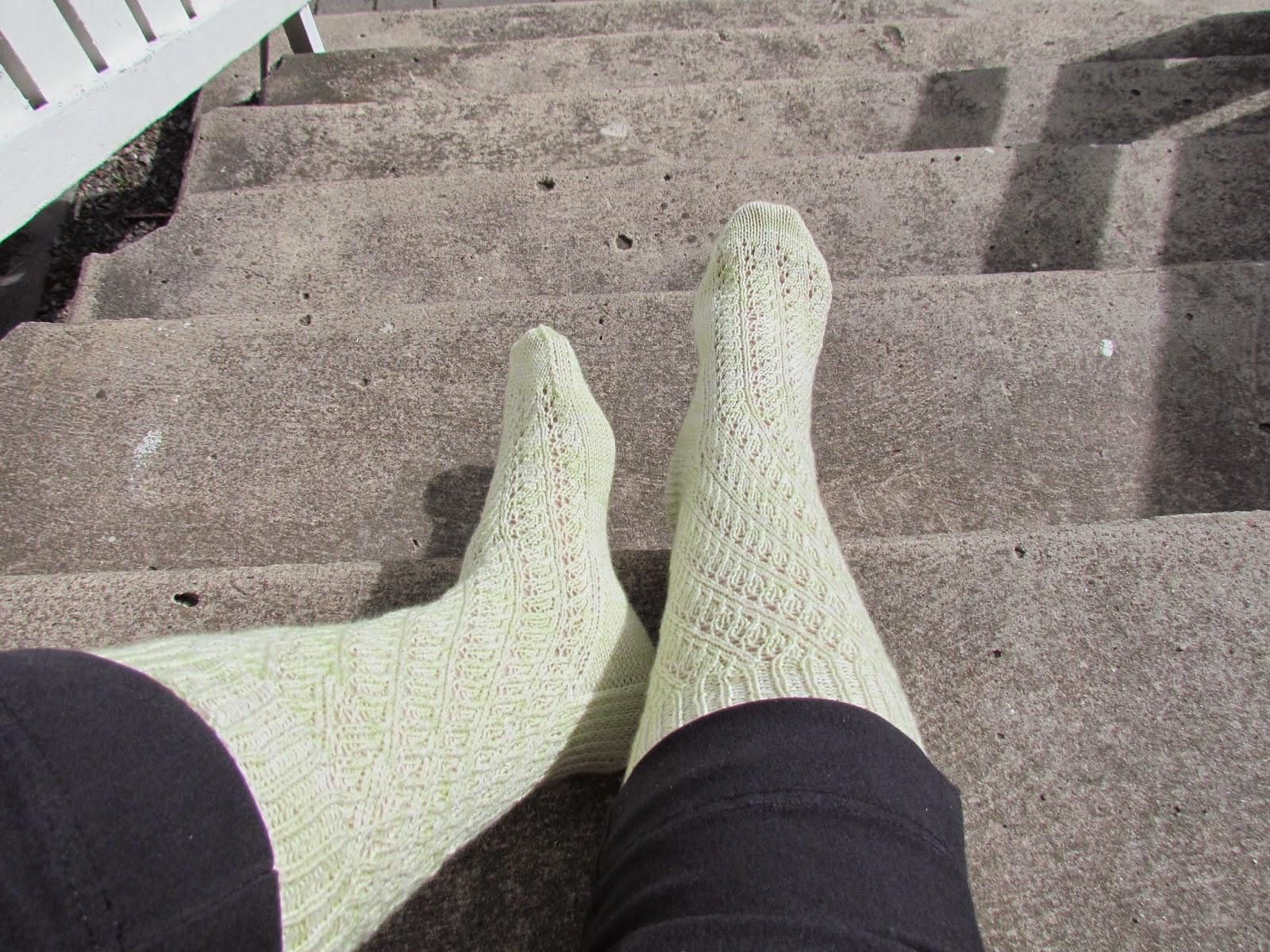 Some yarn was left, so I knitted a tiny baby hat. I think I will make some more, and when I have knitted enough, I can take them to a local hospital for their newborns as a gift. 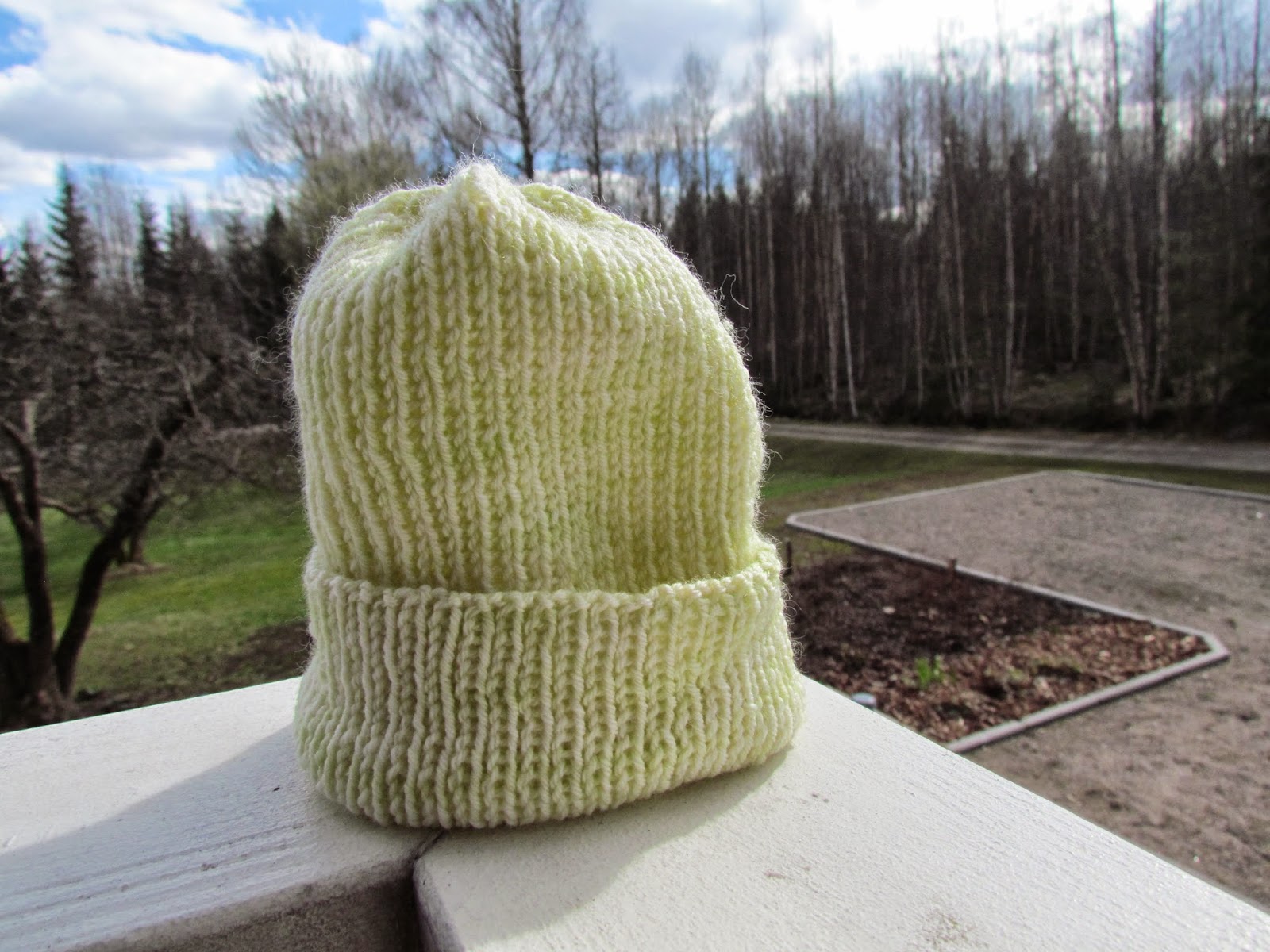 I have started working on a new old quilt, something I cut up years ago and my squared for HST blocks were cut too small so I put it all in a box. Now I'm saving all the blocks I can and cutting the rest to a smaller size. I have material for new larger squares so I think it can be finished almost to the original plan, and then I have all those smaller HSTs for another project.

OK, just one photo from the Fly Fishing Event. The Finnish casting demonstrator Antti Guttorm was wearing his traditional Sami outfit after having seen the Scots in their kilts and the Germans in their leather pants: 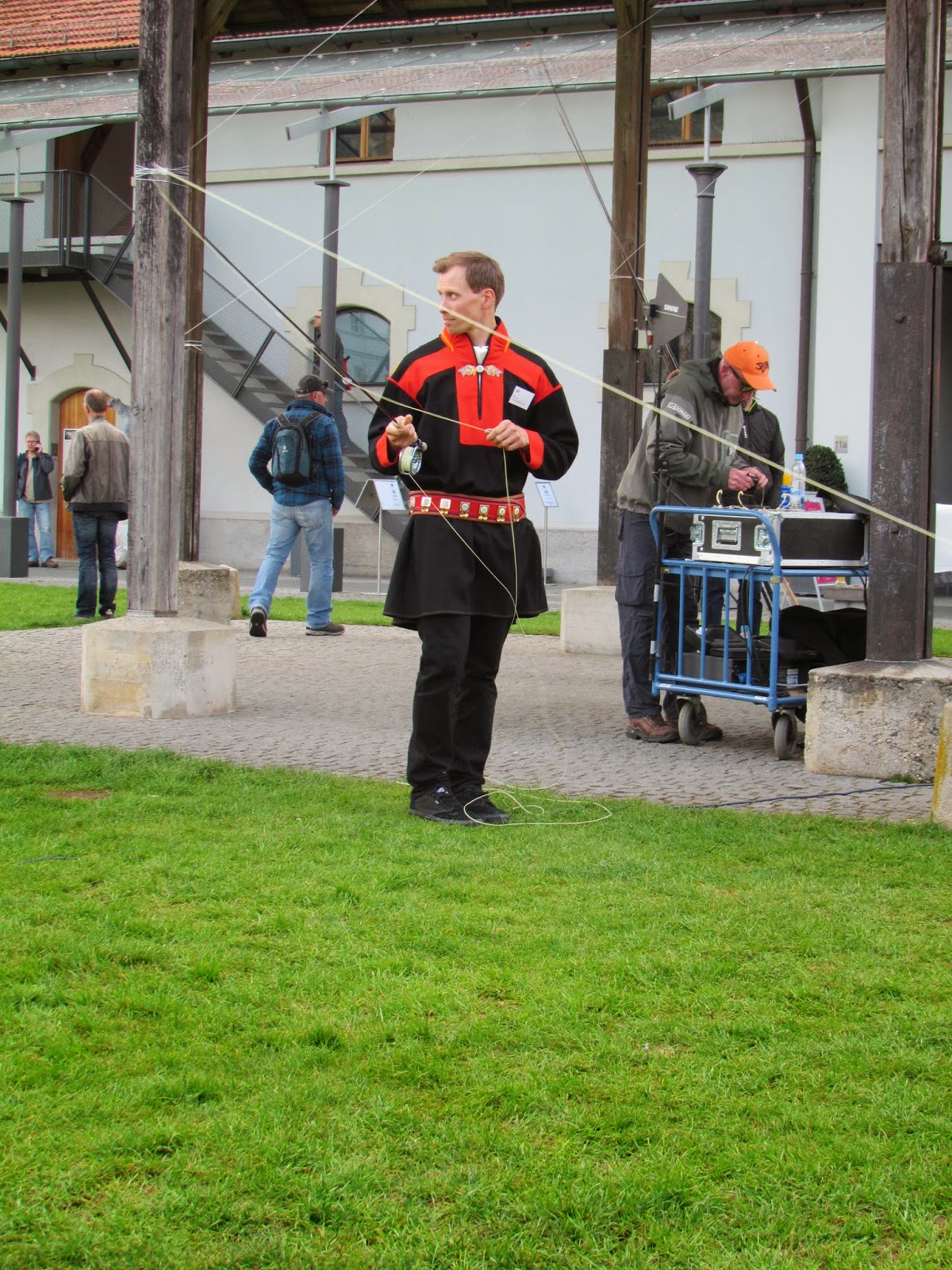 Tatting and Knitting, and a Squirrel Story

After some weeks of hard work with the quilt show I have concentrated on smaller projects. Now I feel that I have finally really understood the idea of tatting, when I finished the open college course of 4 evenings. This is my first own project, I still need to improve my skills with the thread ends! 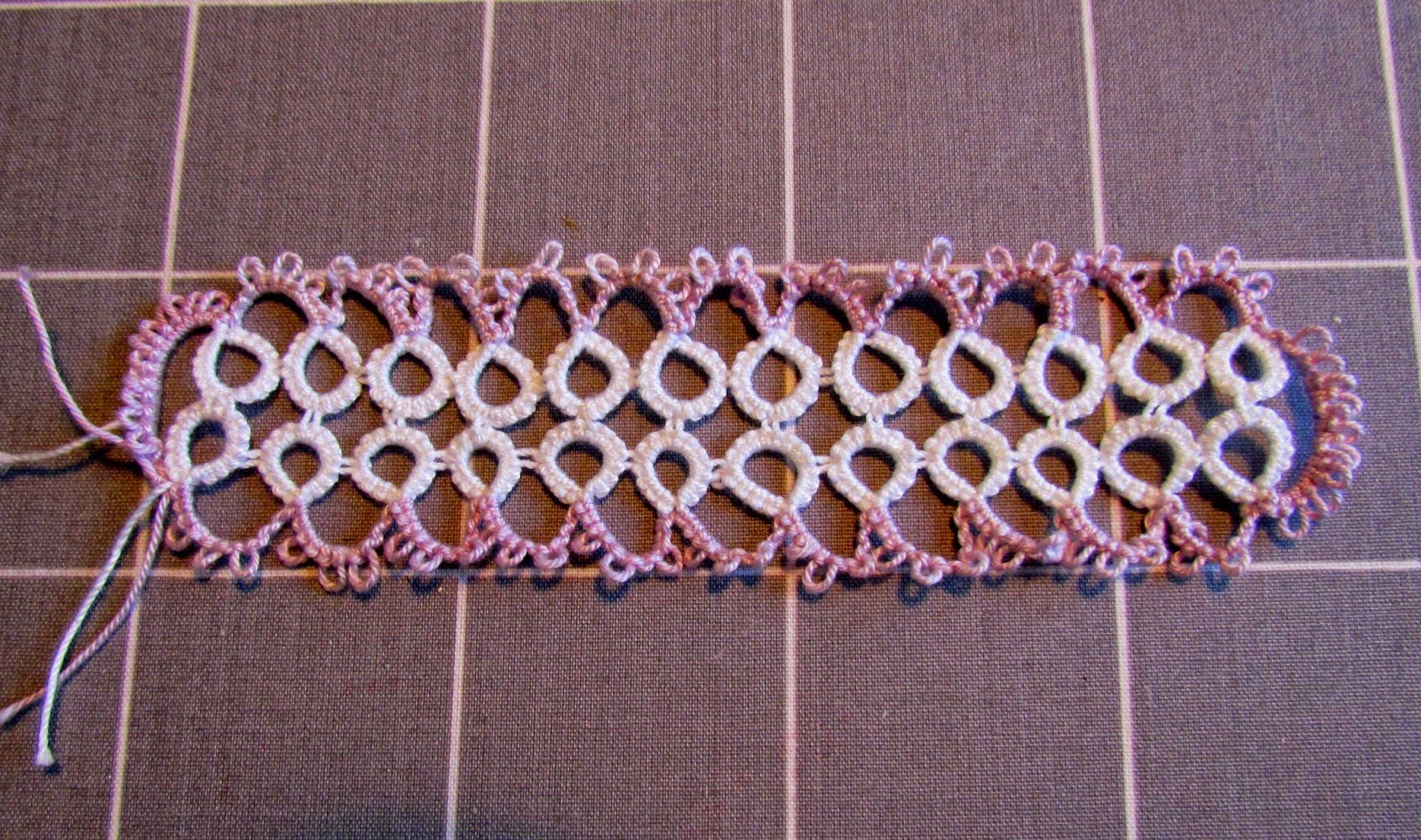 I thought  I understood the idea five years ago, but the success with the first ring was just more a coincidence, and my enthusiasm died soon. This time I'm using heavier threads and crocheting yarns so I can see my knots, and I have learned enough tricks to make a bookmark or a little coaster.

I have finished my cable socks 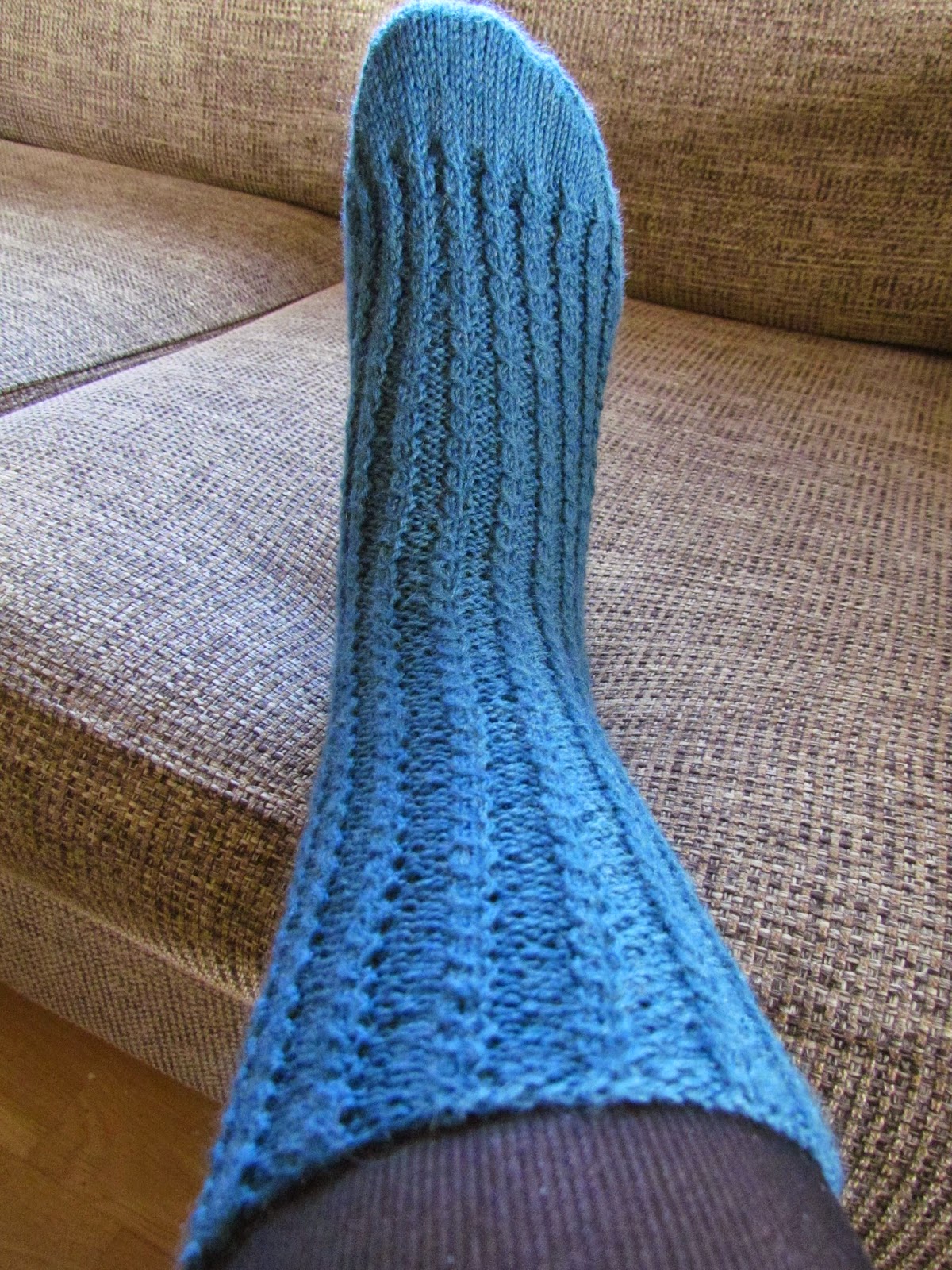 with a perfect fit 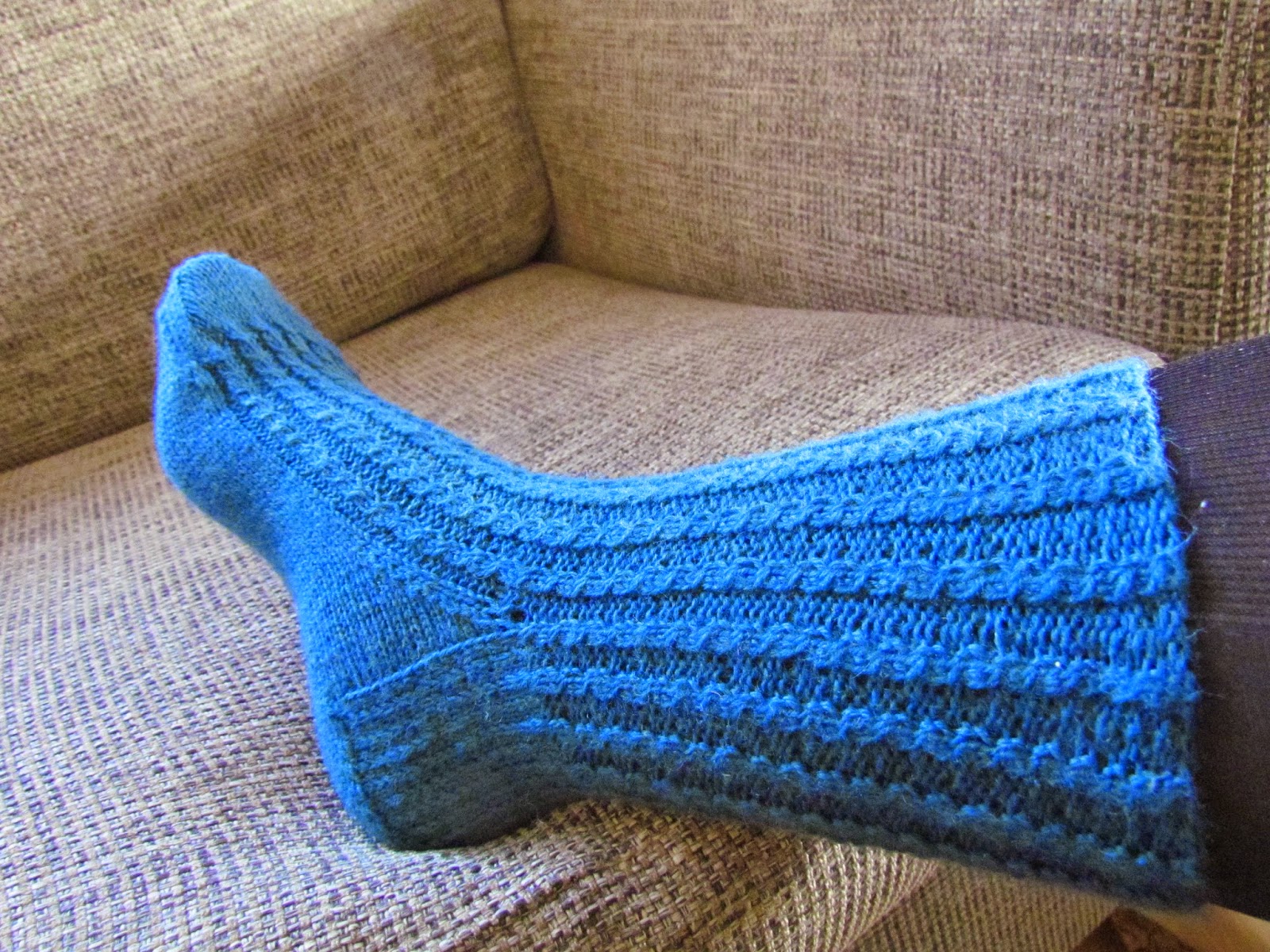 and started a new pair, this time bed socks in the lightest green you can imagine. They will be my travel project too. On Thursday we are flying to Germany for a week to stay with Mr K.'s sister. 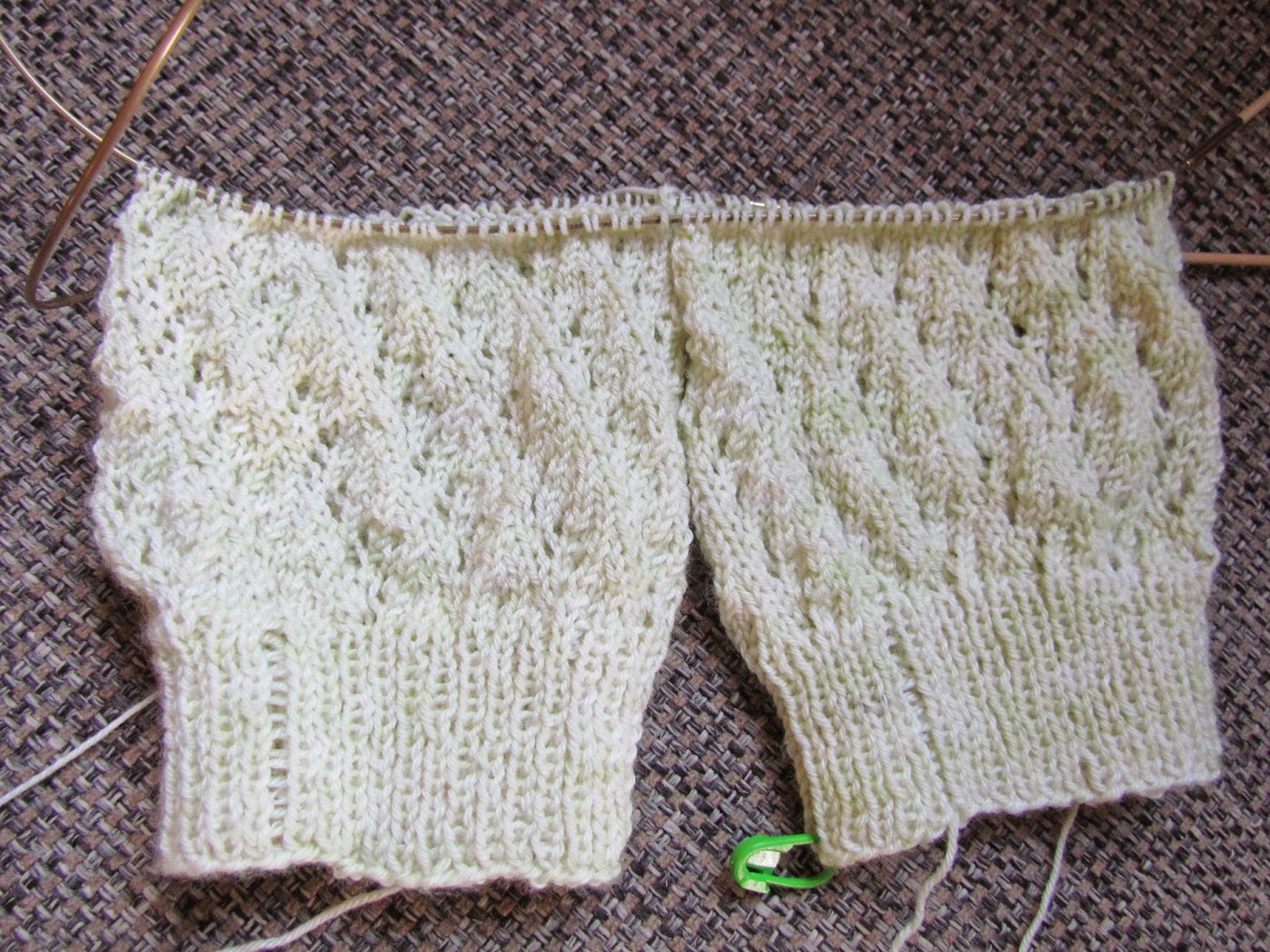 I want to finish with a story of a squirrel who learned some tricks. In February he did some stretching exercises and reached from the oat bundle to the fat and seeds sausage: 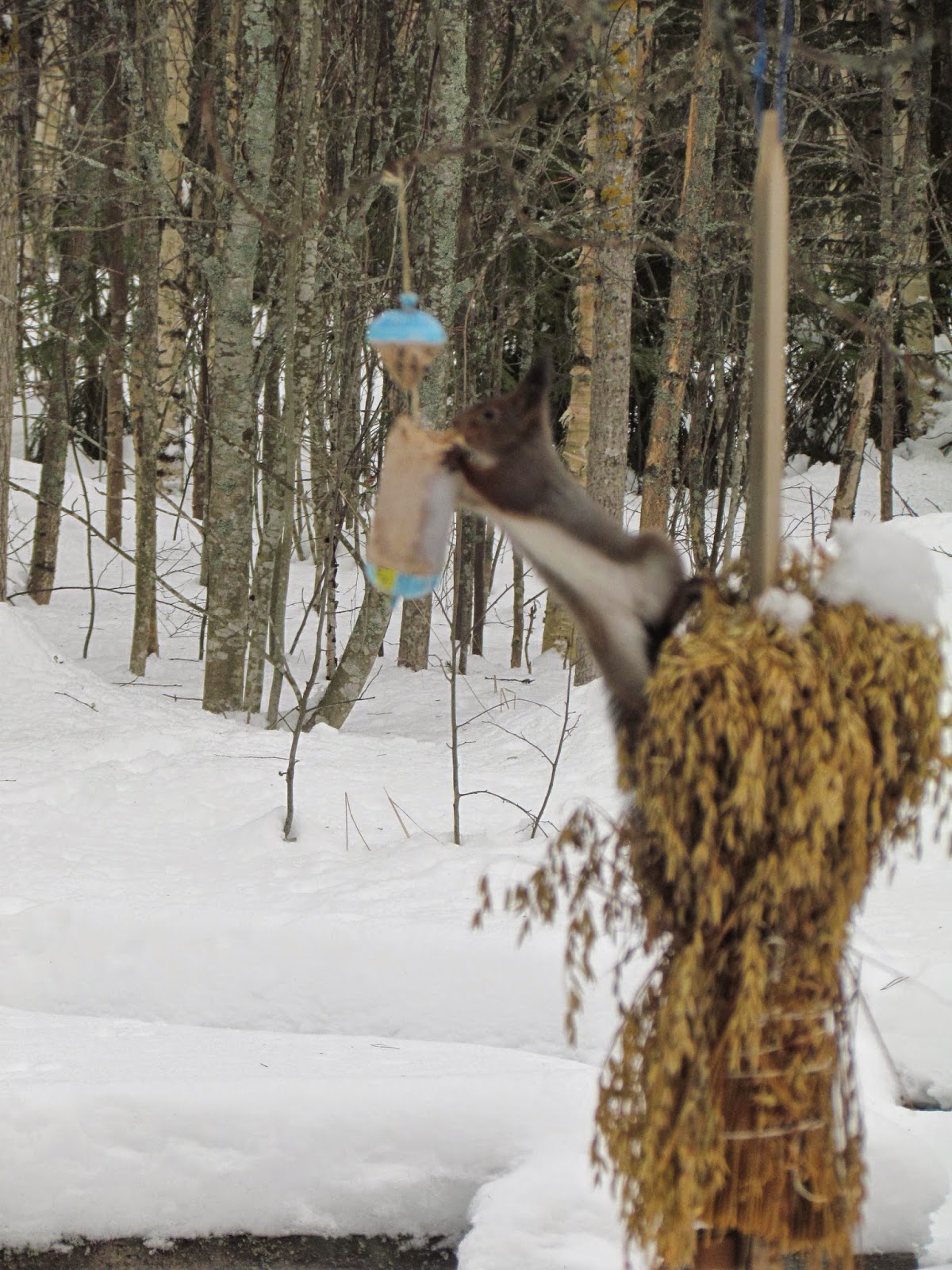 Squirrels understand the perfect timing of swinging branches. He made the oat bundle swing the right way, holding on the wooden stick before even reaching out. Then he held the fat with both fore paws and ate very fast, for a long time.

At the end of March the birds and this one squirrel had almost finished the treat. On a windy day the squirrel reached again for the fat, held it tight and sat on the oats to eat. Then he thought of climbing higher with his prey, and in no time he was up on the oak branch sitting  comfortably and enjoying a nourishing meal: 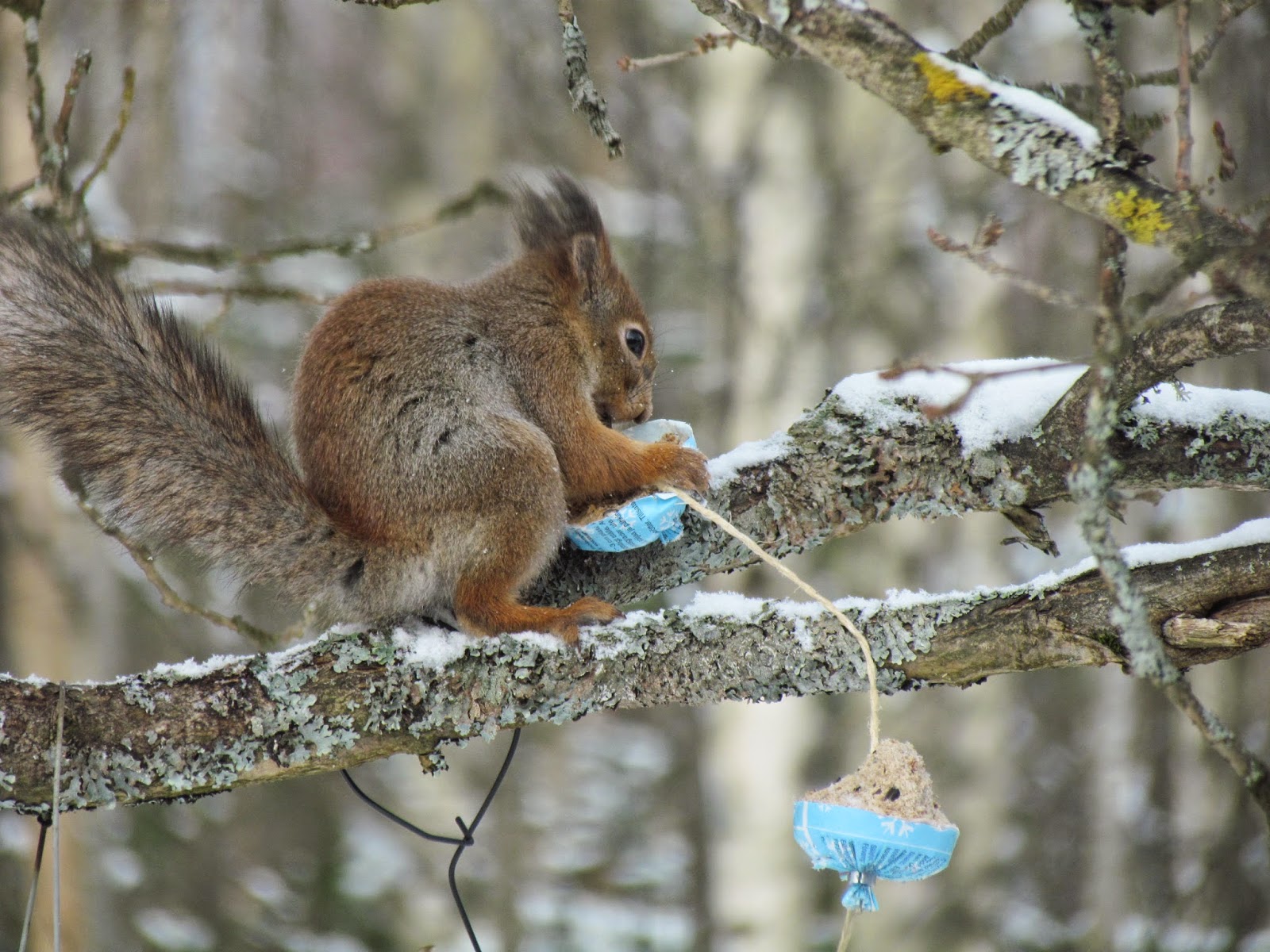 The string had come off the hook where it was hanging (under his bum in the photo), so the squirrel considered it a restaurant doggie bag and took it all home to eat later. 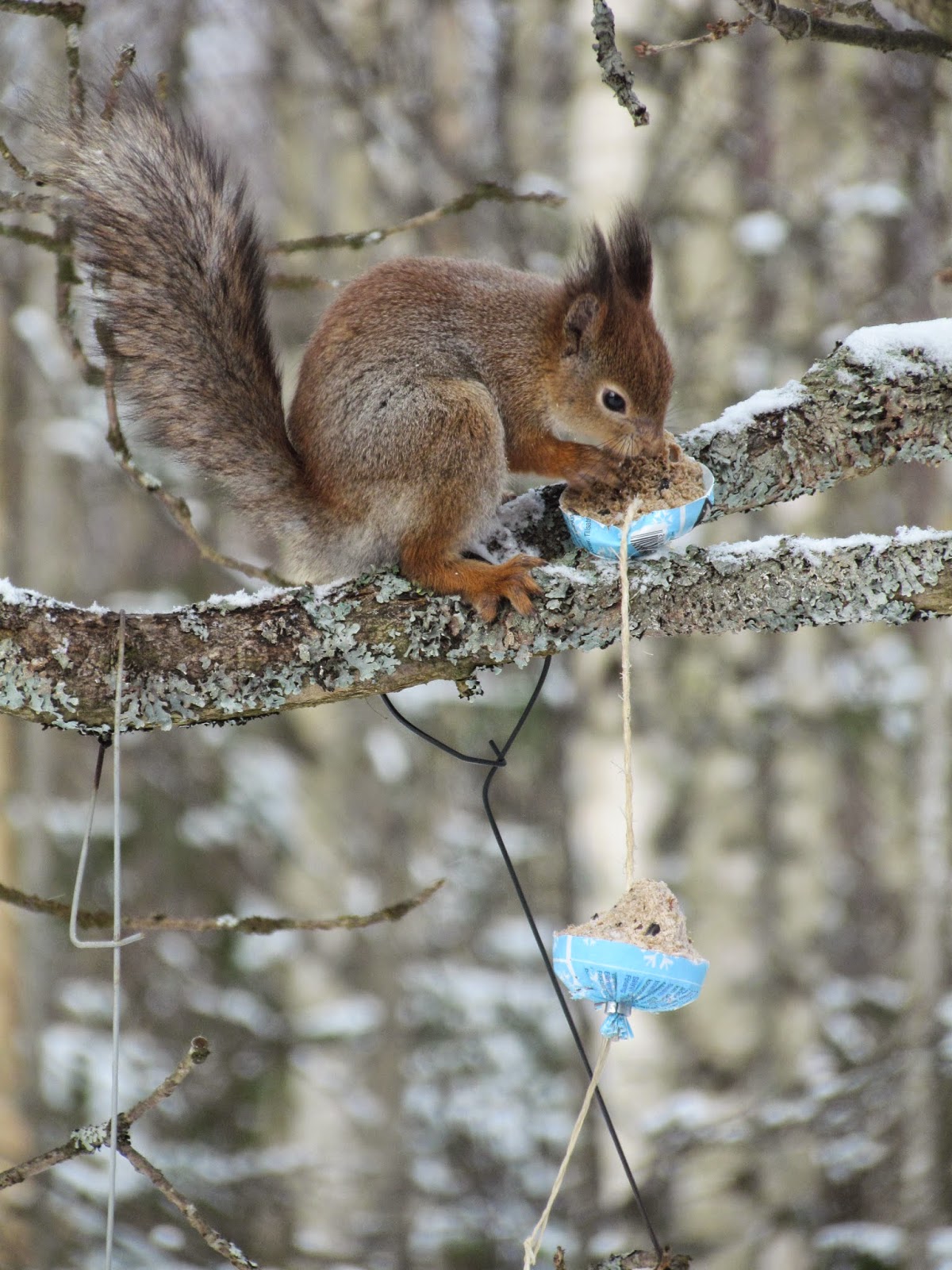 At home his mama or his wife said: "Let this be the last time you go and eat fast food! Squirrels should eat seeds from cones, and berries and mushrooms. You will not learn to fly by eating bird food, you'll just be fat!"

Quilt Show at the Villa Cooper

There it is, my polka dot peppermint candy quilt with a border and binding. 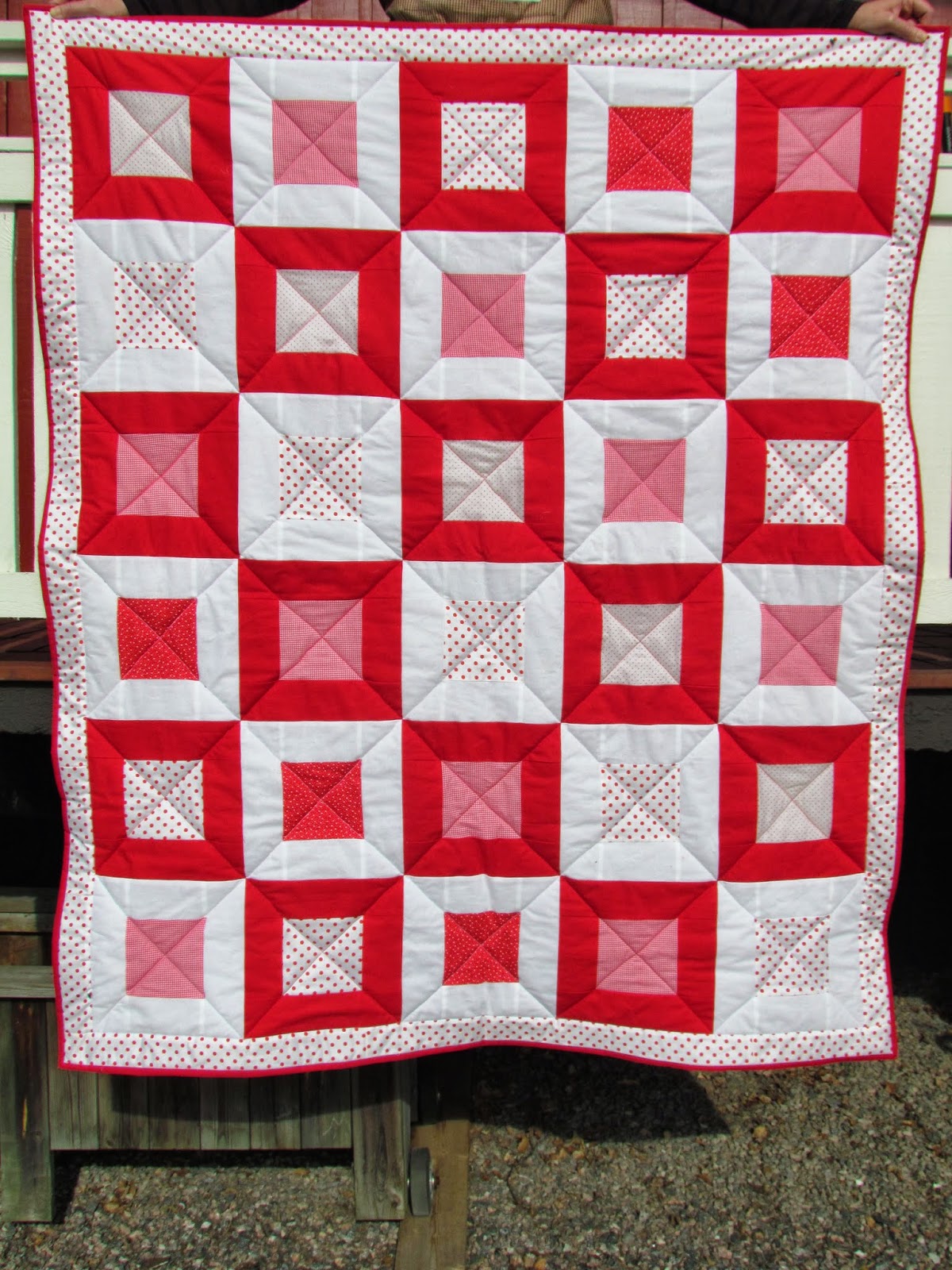 Kaija brought me the solid red binding fabric on Sunday and helped with the hand sewing at the other end of the quilt. I needed the quilt for my quilt show we were scheduled to put up on Monday.

Welcome to Villa Cooper! On the wall, hanging with the generous help of Mr K. is my pride, the Grandmother's Garden quilt for Kaija. Hand pieced during 1993-2003, hand quilted in 2008. 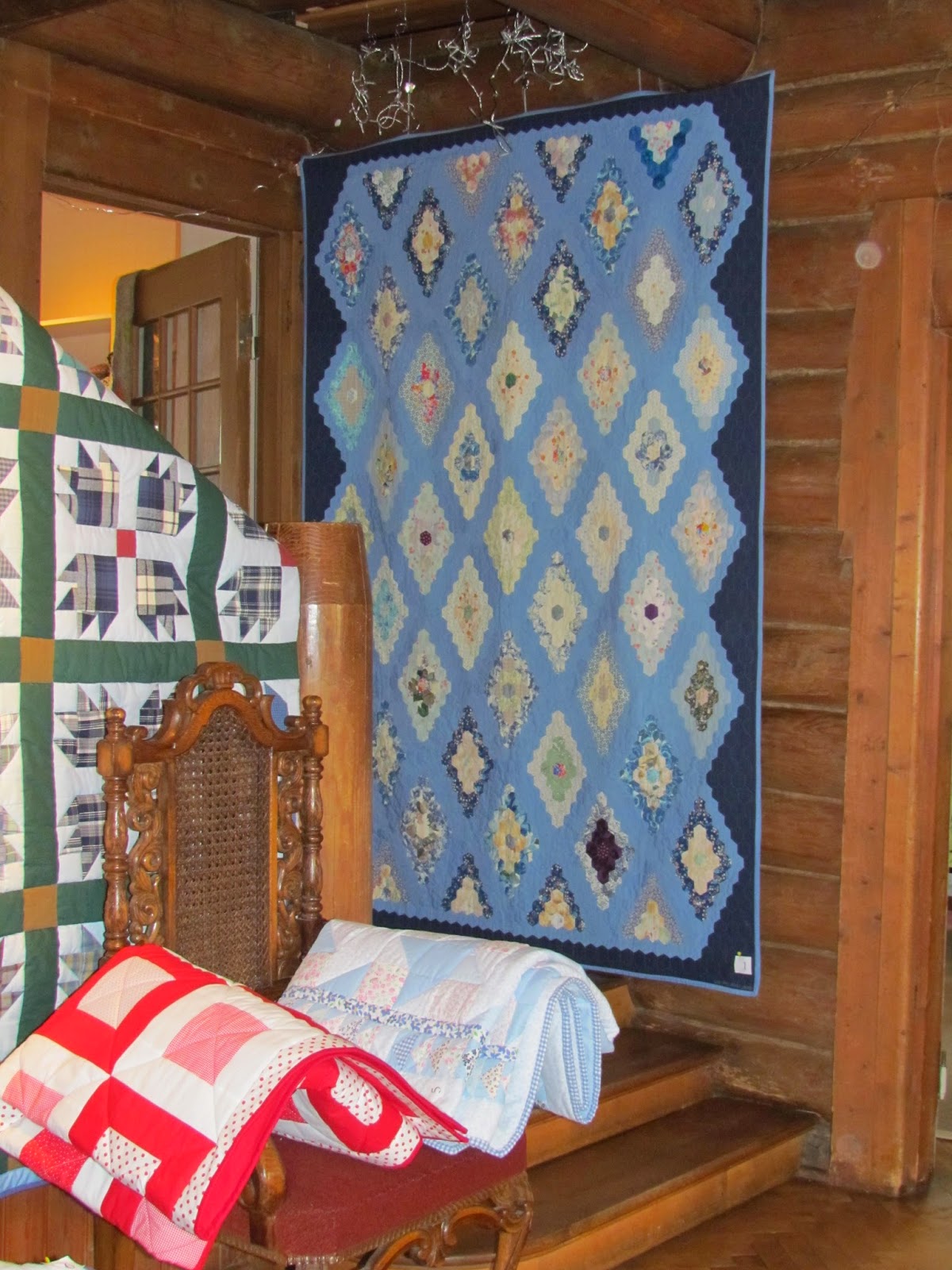 The show's title says something about many shirts making a quilt, and these quilts have many shirts in common. The Bear Paw is from this year, the Maverick Stars is older, and the 9-patch was made for Anne Marie's challenge in 2011. 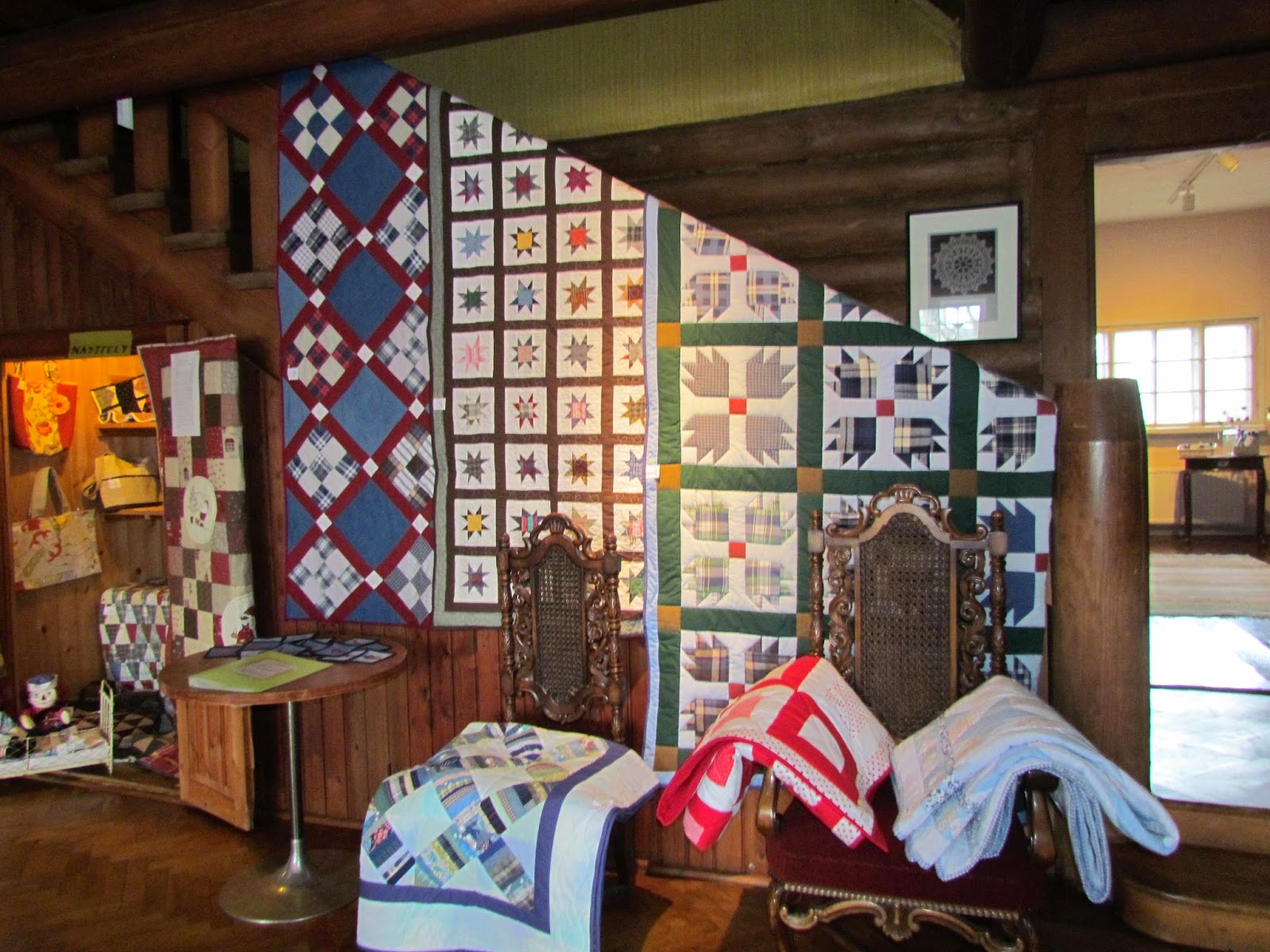 On the chair is the String Quilt, on the other chair the polka dots and a light blue Friendship Star quilt from 2008. 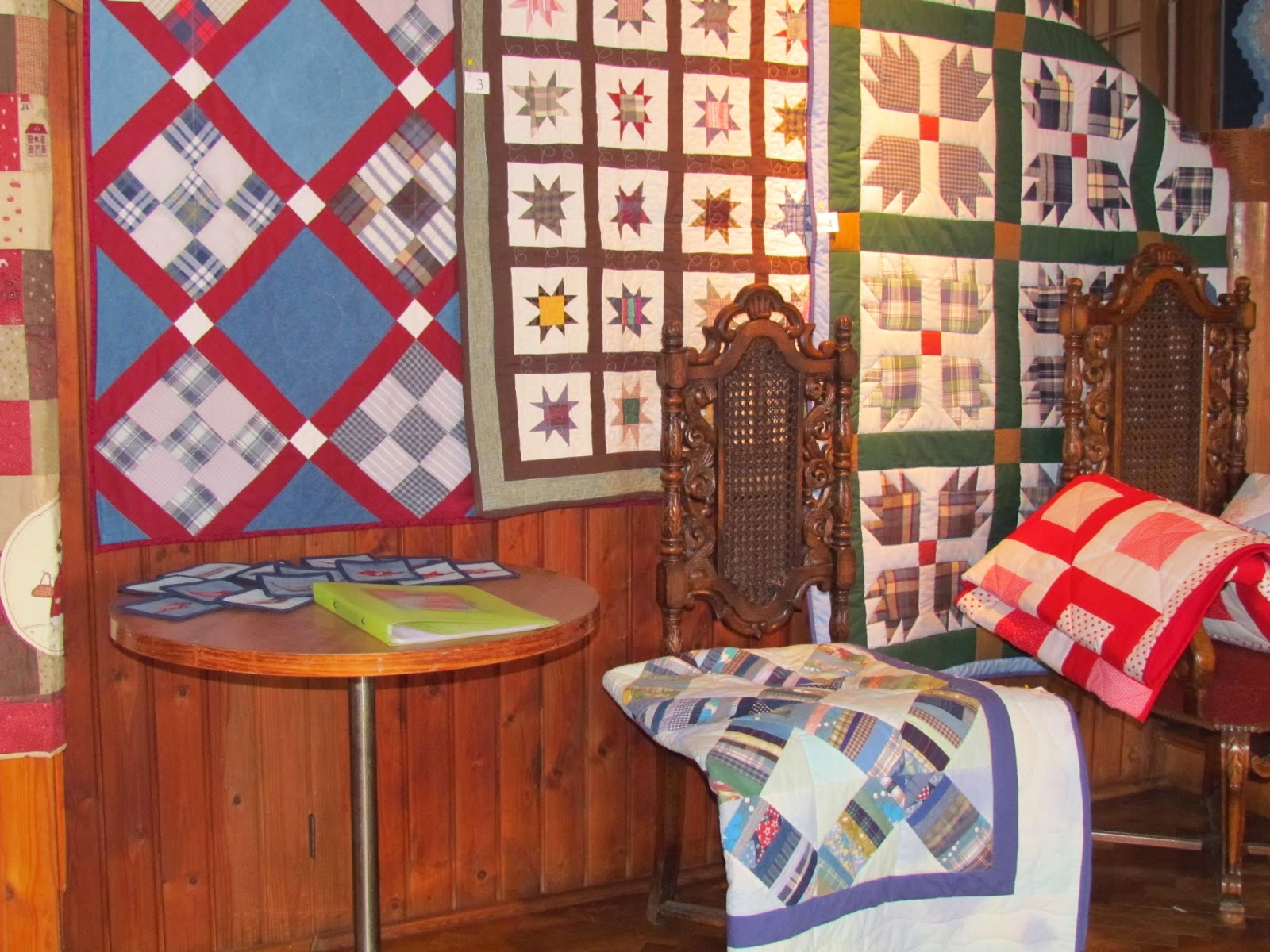 This closet is usually reserved for small exhibitions but as my quilts are so big, I was allowed more space. On the double doors are my two quilts that combine embroidery with a quilt, the Raggedy & Friends on the left and Scandinavian Snowball Fun on the right. These quilts go around the door so you can see the other side too. The Raggedy Ann and Raggedy Andy dolls are a gift from Eileen many years ago. Further on the left is the Granny Square quilt from 2012. 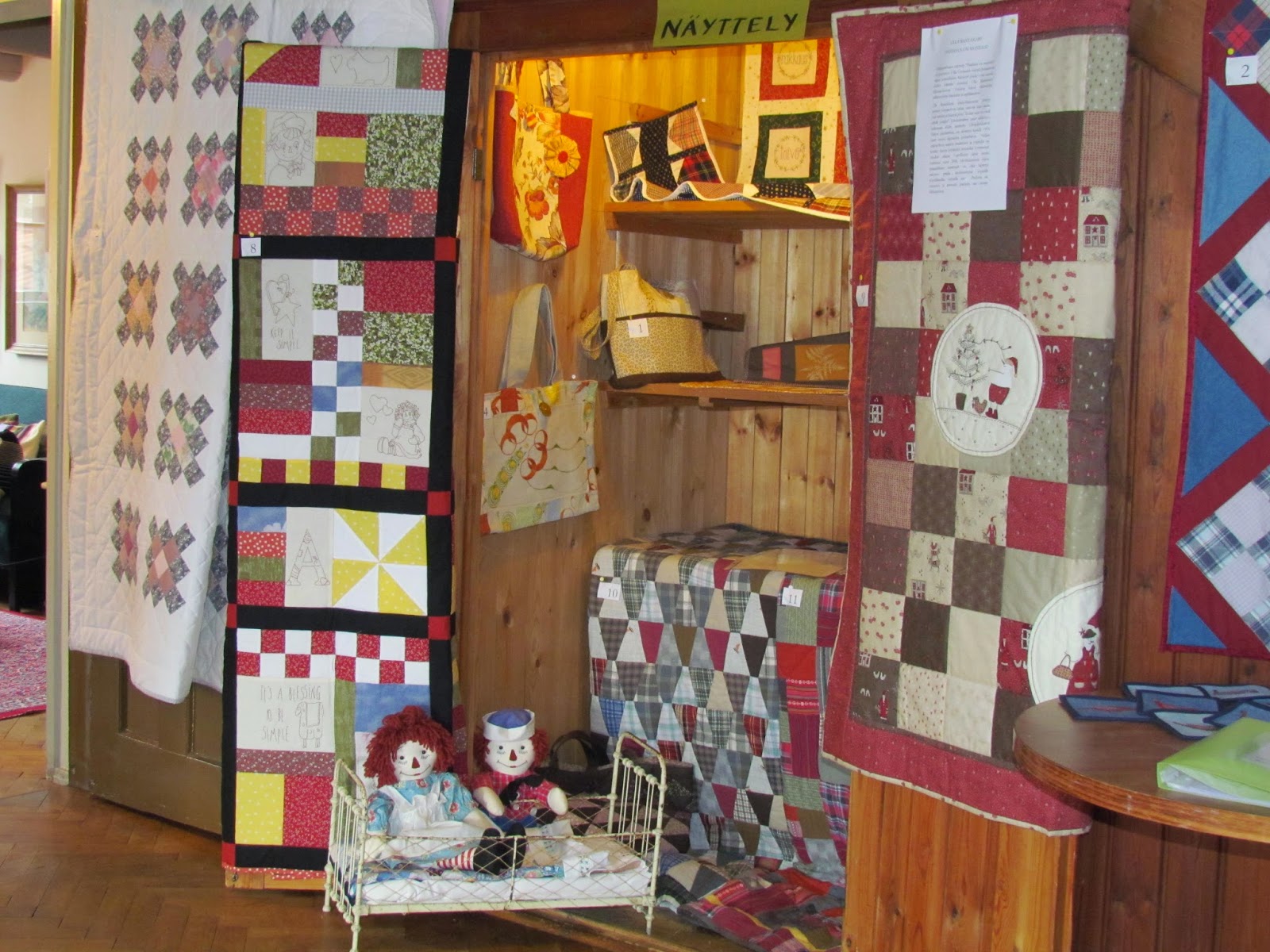 Inside the closet is the tumbler quilt I made for Mr K. in our Summer Stash Challenge in 2008 when my blog was very new, and next to it my own After Work quilt. On the upper shelves are some table runners, place mats and such, and on the walls some bags, almost all of them made with Stephanie's patterns.

On the little table is a folder with photos of other quilts I have already given away but wanted to show too. Kaija was playing a computer wizard and made everything look good, and edited and printed my photos.

Now you have seen why I have been so busy and finished three quilts this year! Luckily there were also many old quilts I could borrow from their owners.
Posted by Ulla at 17:24 10 comments: