Once again, I seem to have a "quilter's block", which doesn't mean that I'm producing quilt blocks day in, day out, but quite the opposite. There are lists of quilts I would love to make, great patterns and lovely own design thoughts, but the fabrics stay in their boxes, rulers are sadly hanging on the wall, and the sewing machine gathers dust.

My way of dealing with this problem is, naturally, knitting. And doing it like my mother did with her knitting and sewing, trying to get the most of a small amount of material, and still pleasing the eye. Here I used rests of some yarns I used earlier this Autumn for men's socks. The mottled green and the dark green were very close, so making wide stripes with just those two would not have looked good. I separated them with thin grey stripes. Then I still needed the very last meters of the dark green for alternate rows with the mottled one to cover the toes. There it is, the biggest possible pair of socks out of those yarns. 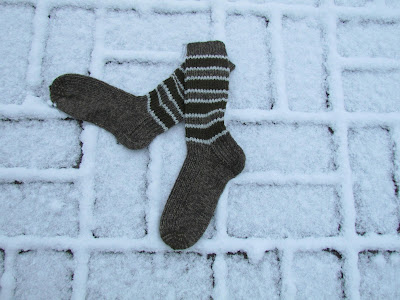 Next there was the dark blue from the lime and dark blue socks, and the greyish blue from some other projects. I just knitted the legs as long as the lighter blue allowed. There is nothing of it left, but the dark blue will reappear in some stripes later. 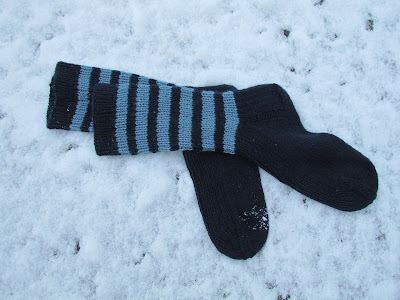 Here I used the "knit as far as the yarn allows"  method again, this time it was the light grey that needed to be used up. This is the first project where I have used the second one of my own grandmother's traditional patterns which I managed to repeat and put in writing . They make a warm knit without having to run two yarns at the same time, and without long loops on the reverse. If you click on the link, you can find the pattern in the text. 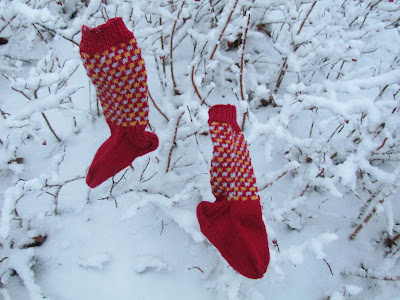 As you can see, our black and wet landscape is covered in white snow for at least some days. It started snowing during the night, and it continues. Every day is 4 minutes shorter than the previous one, but in a few weeks the sun begins to set at the same time every day, in preparation for the winter solstice on the 21st of December. 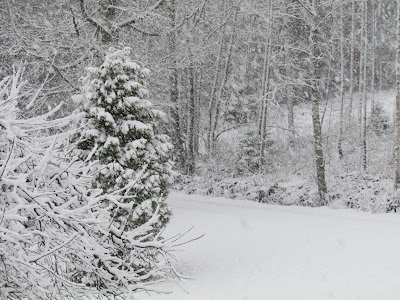 At the beginning of this month Mr K.'s sister came to stay with us for some days, and look what she brought me: 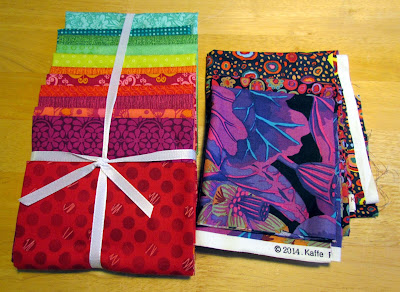 A bundle and some more of Kaffe Fasset fabrics. My plan is to look for a pattern in the Kaffe Fasset quilt books I have in my own shelf, and make something nice for her. These are definitely her colours.

Naturally I have been knitting again. This time I bought a ball of navy blue sock yarn with aloe, and used it with a rest ball of lime green yarn for a pair of socks for my youngest son. There is enough of the blue for another pair for a child, or for a bigger pair with some other colour. Matching yarns for new socks is fun, like shopping in my own yarn boxes. 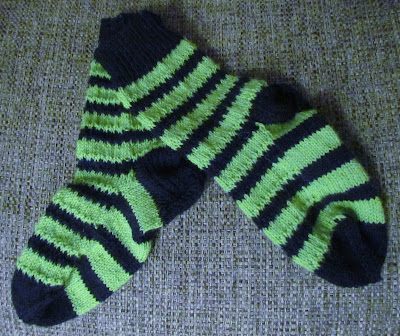 The rest of the pale pink from my last sock posting was enough for the stripes in this pair I called Vanilla and Raspberry. 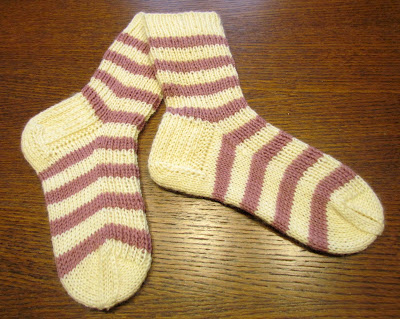 All snow is gone for now, it has been raining but there have been some sunny days too. On the cloudy days these flowers make the world look brighter. 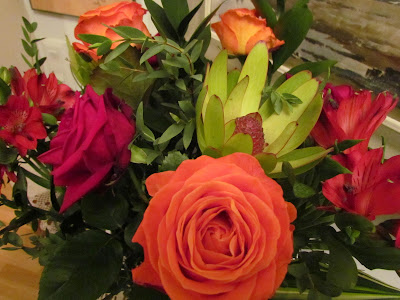