Have you ever joined your quilt blocks upside down, left instead of right or to the wrong end of the row? I have. To avoid this I have used pieces of masking tape with row numbers and block ABC written on them. Lesson: if the quilt is a slowly progressing UFO, there will be glue remains and permanent stains. I have used little pieces of paper with row ABC and block numbers pinned on the blocks, and kept the countless used papers in a tiny box. Lesson: it is very hard to find the numbers or letters needed for a second project. Then I started using one pin for the first row, two for the second etc. Lesson: I run out of pins when I had very many rows to mark.

Yesterday I was piecing 9-patches for the Shadow Plaid quilt and had an excellent idea. I just had the three rows to sew, so I marked the top left HST with a blue pin, the beginning of the next row with a red one, and the bottom row with a white pin. I always think of these colours as blue-red-white, no other order, so it was easy to remember which row was which. 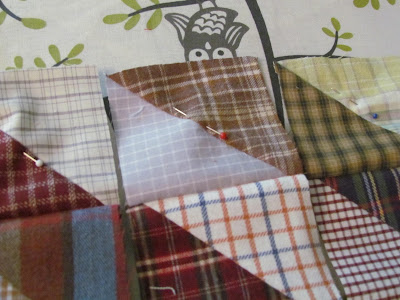 I wanted to make all four 9-patches for a block at a time, so I pinned the finished rows together with an extra pin (no colour code here ;o)). 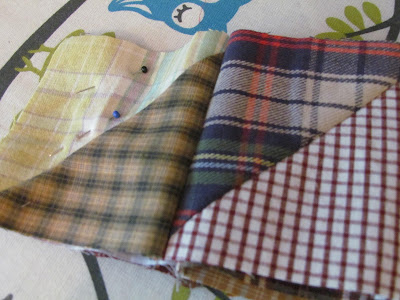 This way it was easy to keep each set separate for ironing. When the 9-patches were sewn after ironing, I marked the top left corner with a pin again, because it matters that they stay the way I planned. 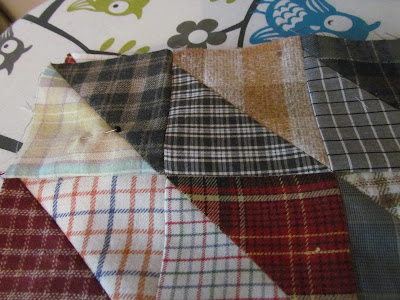 I don't want the same fabrics side by side in two blocks, and in a scrappy quilt like this I don't have my fabrics representing those of the pattern. I just make my own combinations. When a whole block is ready, I have removed all the other pins but use again one pin to mark the top left corner. I think I will use the blue-red-white system here too for the first row of three blocks, or, because I will have 12 blocks at the end, I could use any colour in the alphabetical order of their names. 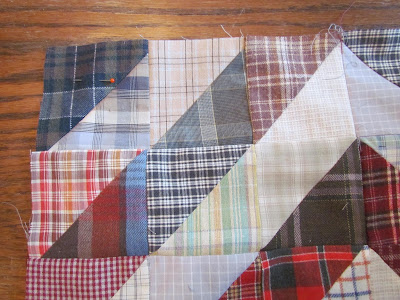 This quilt has had such a slow start but now I'm at the stage I love most, and the little scraps of old shirts stored in a box are finally coming together to blocks that look like something with a plan. 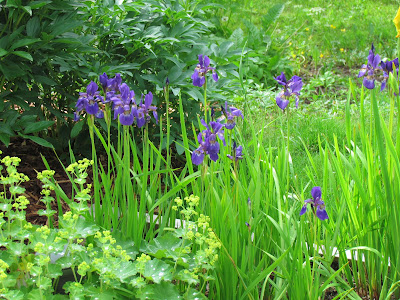 How do you keep your blocks organized?

Some projects don't want to play with me nicely. This is one of them. I was excited to start it quite a long time ago, one Winter. 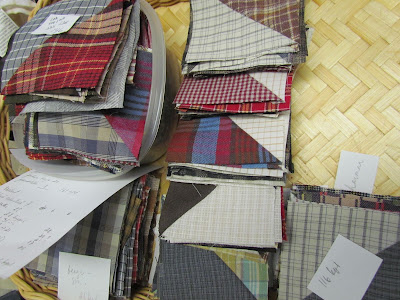 I had not much experience with HSTs at the time, so I cut my fabrics exactly like the pattern said. My seam allowances weren't as scant as they ought to have been. Arrgh! Better store such a project away for a long while. Now I have unpicked some seams, cut down several hopelessly too small squares for a smaller project, and cut lots of new more generous squares. I have drawn diagonal lines, sewn diagonal seams and cut 146 medium/dark HSTs and so far 116 dark/light HSTs. 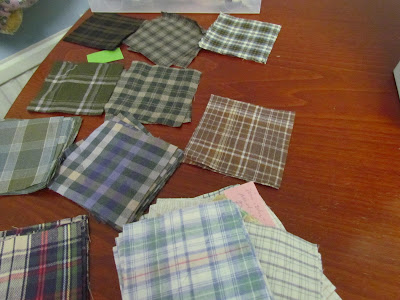 Still a lot of sewing and cutting and trimming to do before I get to the fun part, arranging the squares to blocks.

This year we have had to wait for warm (over 20C/68F) days longer than in 50 years. In Järvenpää, the same organizers as before have planted flowers to cheer up the streets, especially this ugly fence around a parking lot. 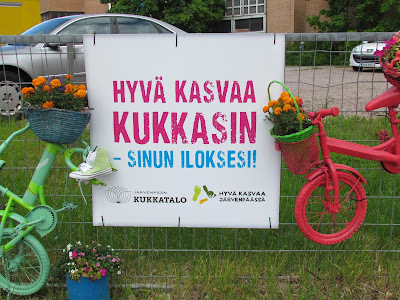 In 2013 they used boots and in 2014 handbags as planters. The florist shop sells a special bouquet of flowers all year, and for each sold bouquet they donate one plant for this project. They have donated 1,000 plants again this year! 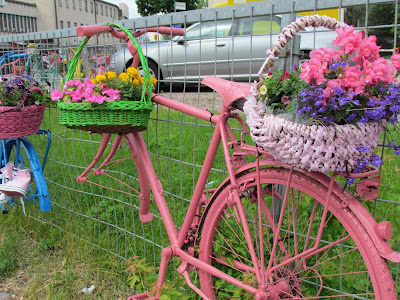 I really like this year's idea with bicycles that have reached the end of their cycling life, painted all in different shades, with all kinds of baskets and 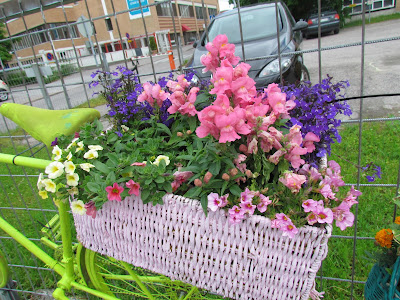 even an old barbeque on top of a painted suitcase or a metal bucket look fun. 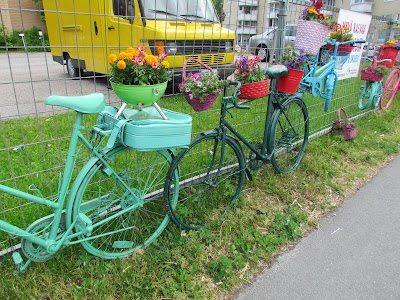 Another Aviatrix baby hat for a friend to give to the future granddaughter (?) of  her sister. I really like this pattern and I hope it will suit the baby. The flowers can be removed if the baby is a boy. 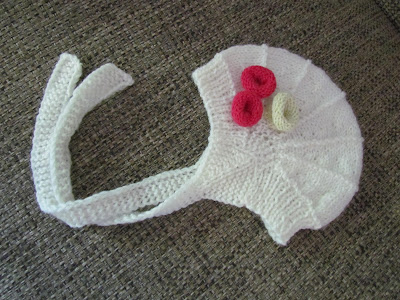 This is the first year that our rhododendron is in full bloom, at least this one. Maybe it likes this 12C/56F temperature and the strong winds! 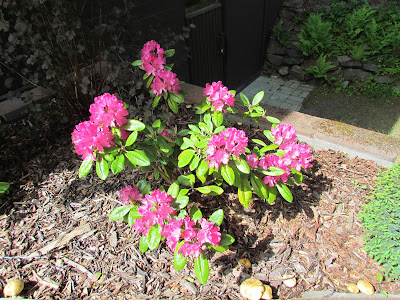 Do you remember the baby hat challenge I set for myself in May during the Giro d'Italia? I wanted to knit one baby hat for the hospital for each of the 21 stages of the cycling tour I watched with Mr K. 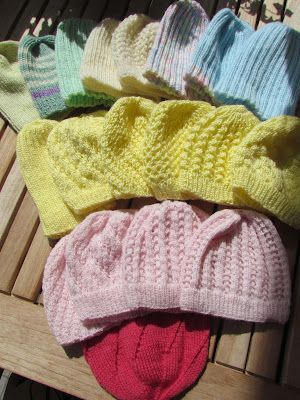 Here are 19 hats, including the top left one I knitted before the race, but not counting one white hat that already went for a tiny baby due soon, and the hat and booties set that I sent to our nephew's son. The next knitting session will be the great Tour de France beginning on 4th of July, also 21 stages and about 3,000 kilometers.

Mr K. has been busy again with his Summer projects. This week he added the wall triangle to this end of our terrace and painted it red. The other end is more difficult so he will rent a lift thingie. 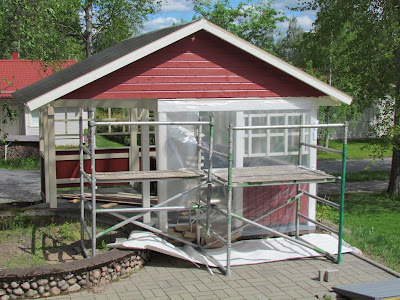 Last night we had a 0 temperature but the garden flowers are used to it, they seem to last longer in this not so warm weather. Today is the day when it is traditionally safe to plant the potatoes and summer flowers. No more night frosts to be expected. 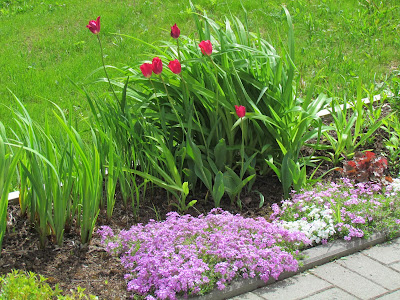