The problem with yarn rests is that when you start a project you don't really know if there will be enough yarn. Clever people use the upside down method, more commonly known as toe to top, but I find it very difficult to calculate when to start the heel, so I prefer starting up and knitting towards the toes, the old fashioned way. Careful as I was, I knitted these Harry Potter coloured socks in a rather small size, and ended up having still some yarn left, and so I knitted another pair in a baby size. 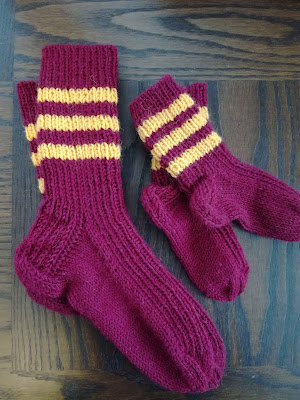 Then I started a more demanding project for an elderly birthday boy. Plain grey socks sounded too dull and modest, so I chose a simple cable pattern I had admired for a long time. 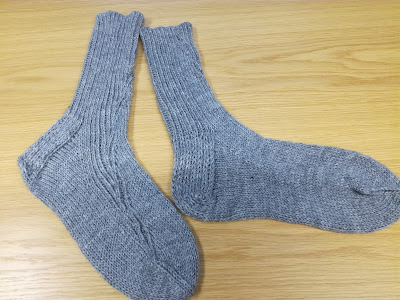 The cable is as simple as can be, two stitches crossed, once or twice every other round, but boy was it a struggle for me! I could not keep track on where I was on the pattern, what I had knitted on the previous round or where and when I should start the cable-ing. Finally I remembered the stitch markers and used them to mark the beginning of the pattern. I decided to stick to more simple ways of knitting again, plain stripes or purl and knit variations.
I have also worked on a secret sewing project but it will be revealed in a week or so.
Some dust from Sahara sand storms reached our country. It showed clearly as a yellowish layer on top of the pure white snow. Just for fun we filled a glass jar with the dirty snow to see if there really was sand, but when the snow had melted the water in the jar was coloured, and only very little anything was left in a white coffee filter. Only the lightest particles were carried high up in the air all the way to us. Now the temperatures have gone up from the -20 and the snow is melting when the days are above 0 and nights only some degrees below. The Winter is by no means over yet, we may have new snow in April if we have a cold Spring. 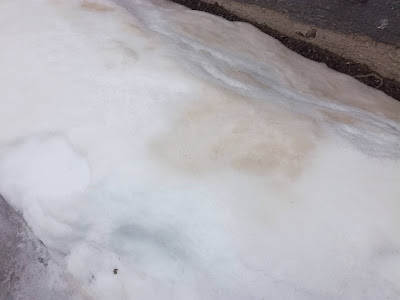 I don't want to end with such an ugly photo so here you have some flowers instead! 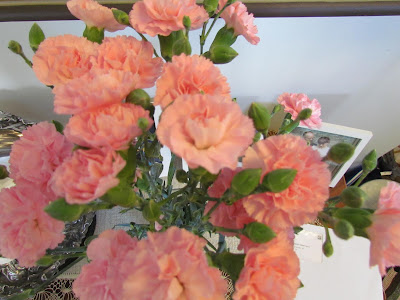 Knitting in the evenings in front of the TV is my way of relaxing. It feels like I'm not totally wasting my time when I knit. I found this version of basket weave stitches and liked it, as it was very easy to remember and didn't require counting more than five rows. 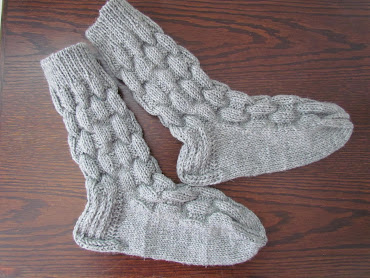 The father of the little knight from the previous post got these mittens to match his son. The yarns are from a pullover I had started to knit for him when he was still a schoolboy living at home. At that time my arms refused to cooperate with long needles and big pieces of knitting, and I developed a tennis elbow, I who have never even played tennis! The son has grown a lot since I began the knitting, so the wisest thing to do was to unravel the knitted half of a pullover, soak the skeins and wind the dry yarn into balls for new knitting projects. 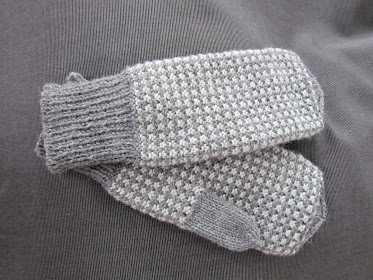 We have had lots of snow this Winter unlike last year when we had none. Mr. K pushes the snow further away from the drive so there will be space for more snow to come. These old apple trees are in our new garden in afternoon sun. 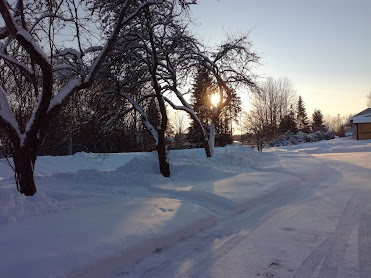 We are only half way done with Winter by now, there may well be lots of new snow at the end of March and it may snow some as late as end of April and beginning of May. Now we are enjoying some sunny days and clear skies, and having but not so much enjoying temperatures of -20 C. 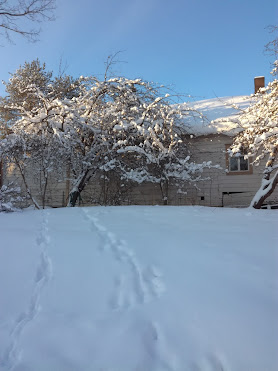 The hares are making their paths in the snow when we are not watching.
Posted by Ulla at 14:45 4 comments: