Stash Use Report for October, and Unicef Doll Show

I had totally forgotten to write my stash use report for October, because there was so little going on. I bought nothing, which is very good. On the other hand, I can only think I used 2.5 m for the Unicef dolls I made: 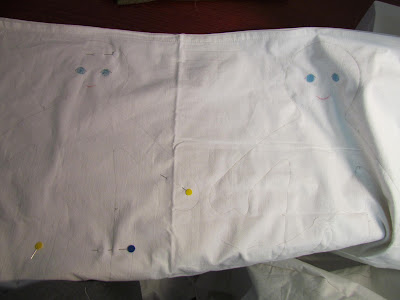 I always sew on the marked lines and cut after that, so the seams will not draw and the fabric stays nicely in place. The faces are painted with textile paints before sewing and stuffing so the paints don't spread. The clothes were made mostly in November so I will count the fabrics for them in this month's statistics. These two girls are going to Germany with my sister tomorrow, for her friend's little granddaughters. I guessed right, the girls love pink and red dresses. 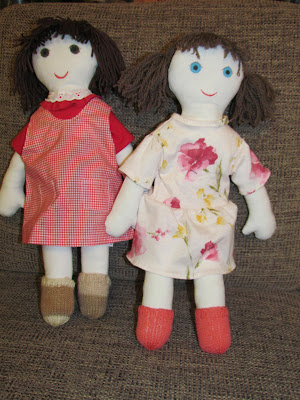 My other sister wanted dolls for her own granddaughters, and as I was busy with making the other dolls, I promised to make them on one condition: She will paint the faces and sew the hair on the four of them. Look at her magic touch: 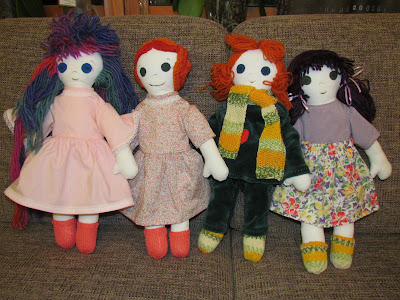 Here are all the new dolls in a group photo before going to their new owners near and far: 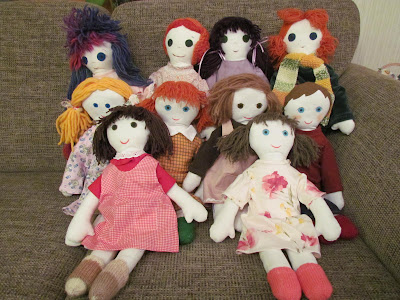 The dolls are made like traditional rag dolls, using recycled materials and leftover bits of fabric. Each doll has the Unicef logo sewn on their leg seam, and an identity card from Unicef, filled with the doll's name and details by me. The dolls can not be "bought" but "adopted", and each of them represents a real child who is helped to a better start in life with the immunsation against deadly childhood diseases which Unicef provides for them with the adoption fee of 20 € or more. The idea and the original pattern of the dolls came from Italy, and they are made by volunteers in France, Czech Republic and Finland as well. The other half of the identity card is a postcard, where the maker of the doll can add her name and address. The doll's new family can fill in the form with information of the doll's whereabouts and family, and send the postcard to the "birth mother". Usually the dolls are adopted at Unicef events or in their shops where school classes or handicraft clubs have delivered the dolls they have made together. The makers have no knowledge of the destiny of them and so the postcard is a nice thankyou for the maker. Inventing personalities and finding suitable names for the dolls is one of my favourite parts of creating a doll for Unicef. I keep a list of my dolls and try not to give the same name twice.

On my walk last week I saw floating rocks? 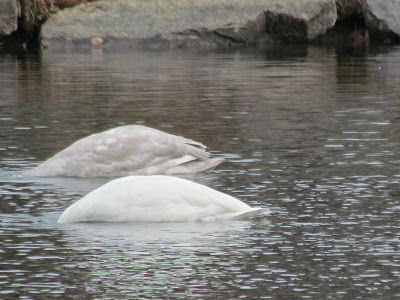 No, the swan family has returned after six weeks' absence. I think the parents have been taking the young ones around and showing them possible places to stay next year when they are on their own. 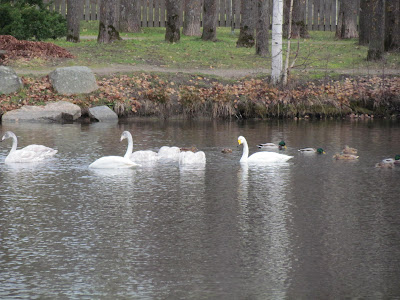 You can still see how the young swans are grey and their bills are not bright yellow like the adults. This morning we had frost for the second time, but the ponds are not likely to freeze over before it gets much colder.