Last night I gave the final touch to the curly look of Makena, and today they all went out to pose for group photos before life will take them to their new homes. So here they are, my Unicef kids from number 47 to 51: 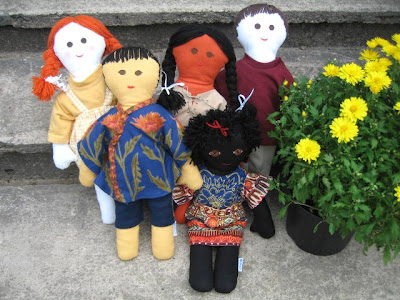 From the left: Helmi (Pearl), Fei Yen (Flying Swallow Bird), Taipa (To spread wings), Onni (happiness), and sitting in the front Makena (Happy). This group truly represents all the children of the world, and I hope they will find nice adoptive families. Maybe the Unicef logo on the doll will always remind their new families of the one child somewhere in the world whose life was saved thanks to the vaccinations Unicef could provide for her or him for the adoption fee of the doll.

Here they are standing on the verandah coffee table minutes before the heavy rain came. It only lasted a few minutes, so the weather continues hot and steamy. 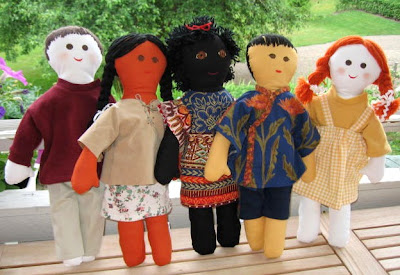 Raggedy Ann and Raggedy Andy wanted to pose with their new friends. They still felt grumpy because I lost the pictures of them hugging Dot and Martha goodbye in March, so now they made sure each one of them could hug two new kids in the picture: 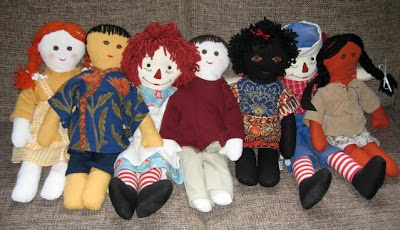 I have their identity cards written, and now I only need to add their passport photos to the cards, and the cards to their wrists before they go to Villa Cooper tomorrow. I hope they will find their new homes soon, so I can start waiting for the postcards telling me where they will be spending the rest of their lives. I always write my name and address to the other half of the identity card, and about half of the cards have been returned to me. The most touching message was from an 11-year-old girl who had seen one of my dolls in the shop, saved from her pocket money, hoping that the doll would still be there, and finally bought it.

It took me over two years to come from 41 dolls to 51. I made my first dolls for Unicef in 2003. I'm still struggling with hair problems and dressmaking, because the dolls are meant for play and they should be safe for small children. I need to add a note to Makena, telling she is not baby safe because of her hair and the pushbuttons I used for her dress. Custom order dolls are easier to dress, using buttons and other easy closures, and their hair can be more dangerously attached.
Posted by Ulla at 16:59