Today I had some photos made on CD so that I can show you my special project of recycling something very valuable. This is a series of three quilts made of my late father's old shirts. He died at the age of 90 in 2005. I asked if I could keep the shirts I had taken home to be washed and ironed, and my mother gave me the rest of them as well.

The shirts still had a scent of my father left, the very fragile touch of him. After a while I started thinking about the text on some shirt pockets: Twin. There were some Melka Twin shirts. I have a sister and brother who are twins, and they had their 60th birthday last summer. I wanted to make them both a quilt with such a piece included. 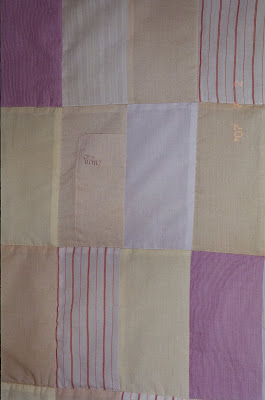 I had been looking through my quilting books and one of Kaffe Fasset's quilts inspired by strips of wallpaper inspired me. I cut all the shirts in long strips about 11 cm wide, taking care to include the Twin pocket. Then I sorted the strips in "boy's colours" (blues) and "girl's colours" (yellows and reds), and neutrals (white, grey and beige). First I made the one for my brother, he is born 20 minutes earlier. I cut the strips in random lengths and made long rows, which I then put together. 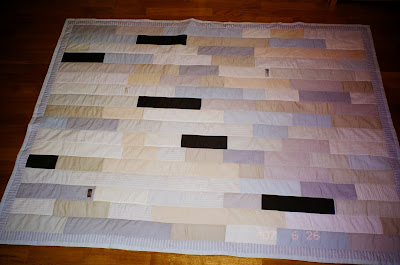 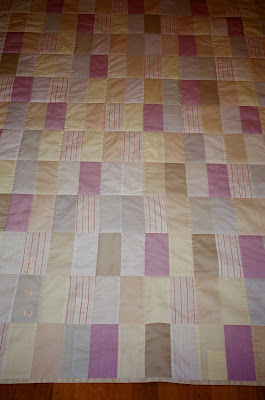 For my sister I used the neutral rests of the first quilt, plus the pinks and yellows, making them all same length this time, twice the width of the strips. The perspective on the photo makes tricks.
For both quilts I made a label on the reverse. My brother's quilt is "Isän tuoksu", or "The Scent of Father", and my sister's is "Nokkaunet Isän kanssa", or "A Nap with Father". They both are called Melka Twins twin quilts. 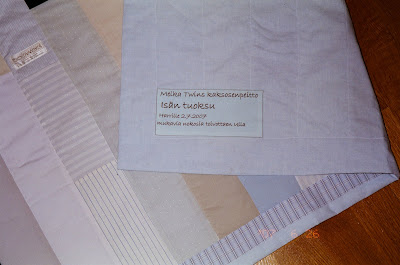 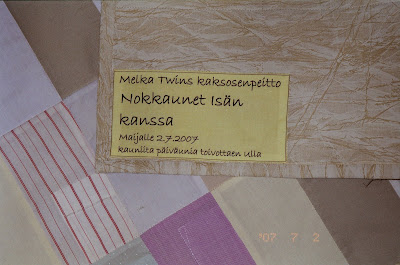 Later I used the remaining pieces for a quilt for my mother for her 91st birthday. The photo is very dark, but it is the only one I made. The colours should be the same as in the twin quilts. Her quilt is called "Vielä melkein sylikkäin", or "Still almost in his Arms". They were teenager sweethearts and married for almost 64 years. 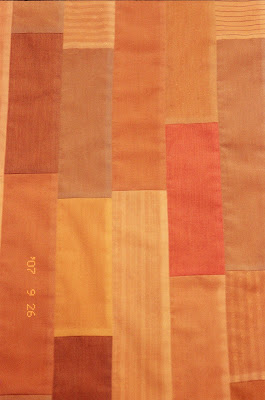 In this series of quilts I have felt a warm closeness with my father and hope that the twins and our mother will keep feeling that too. In these quilts the pieces of shirts somehow still remained shirts, partly because of the pockets I included (if the twins need to take a snack with them when they have a nap ;) ).
P.S. Today I learned to click and drag when I phoned my daughter after desperately having tried for half an hour to save the new pictures from the CD to my computer. She talked me through the operation like the Airport Tower guides the beautiful stewardess to land an airplane with 238 passengers after the pilot has had a heart attack and the co-pilot has lost his nerve.
Posted by Ulla at 19:13