A few weeks ago I found an interesting blog with a very appealing name: Sew,Mama;Sew! There is a Quilting Month going on in February and I joined a couple of hundreds of quilters. This Monday the last "block of the week" was announced, and it was the Pinwheel. I had never made Pinwheels, although it is a simple block. Then I remembered my stash of baby prints I bought for the premature babies' quilts a couple of years ago. I had lots of 8 cm squares ready cut, so I just cut some more and started sewing. 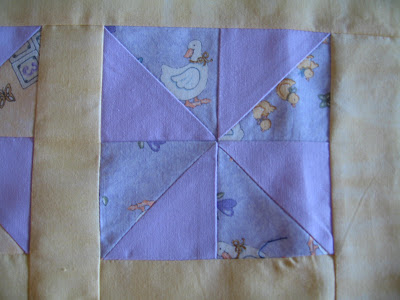 The blocks turned out to be too small (the extra seam allowances because I made triangles), and so I added sashings and frames. 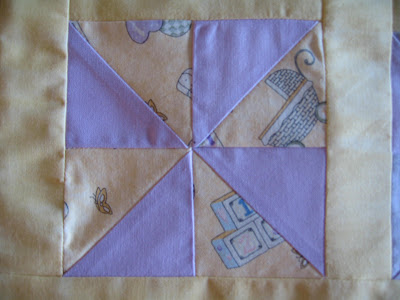 These detail pictures I took when the sun wasn't shining, so the colours are too blue. But I did manage to get the corners almost perfect. 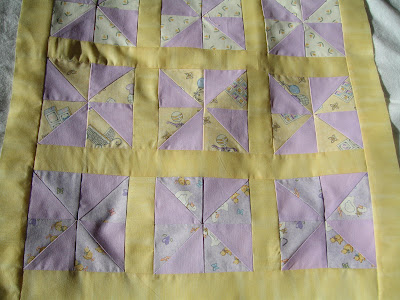 This picture shows the true colours. I had to take the picture at an awkward angle in order to not block the sun. I didn't feel like going out to take great pictures, because I'm having a flu and cold shivers, sneezes and a red, runny nose. Today is not worse than yesterday, so maybe I'm getting better. I promise to stay on this side of the screen and wash my hands a lot.
The quilt shall now remain a WIP because I don't have the right kind of wadding (thin) to finish it just yet. Lucky me, I still have lots and lots of hand quilting to do in Grandmother's Garden. And if I look carefully, there might be some useful sewing to do as well, like replacing worn-out hang tabs on towels. Which reminds me of 12 hang tabs waiting to be sewn on place on the 12 linen towels I made in the eighties. My godmother gave me the linen just before our wedding, and I was supposed to embroider my initials on them as well. About ten years ago I decided I don't need to embroider the initials because it is not something I enjoy doing (lack of practice). But I still have perfectly good towels from my grandmother and her sister and my other grandmother, and the ones my mother made for me and the ones I made (only one has a hole, it's the one I made at school and it has been used longer). But some day, when I feel like it, I'll make the pretty blue towels ready. Only, the unused linen will be so difficult to mangle crease-free...
Posted by Ulla at 11:59